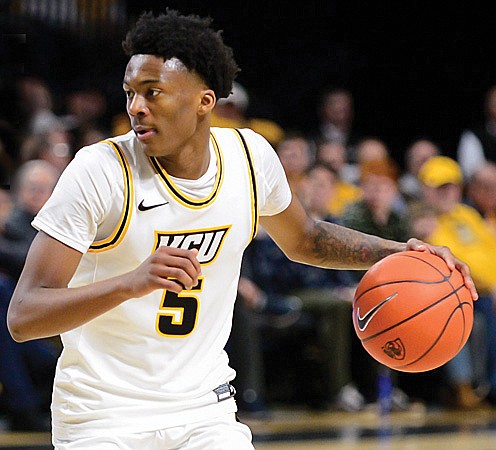 The Virginia Commonwealth University Rams opened this season with a vacancy for a shooter. Nah’Shon Hyland was quick to apply for and be awarded the position.

Answering to “Bones,” the 6-foot-3, 165-pound freshman from Wilmington, Del., has become an added attraction the Rams needed on the perimeter.

“Bones has great spirit,” VCU Coach Mike Rhoades said. “He walks in the room and makes everyone feel like a million bucks.”

Swishing five 3-pointers, Hyland had a career high 21 points against St. Bonaventure on Jan. 18. It was the most points by a true Rams freshman since 2014, when Terry Larrier scored 21 points against the University of Maryland-Eastern Shore.

“I just went out and found my rhythm,” Hyland said of his game performance.

Twice, Hyland has been named Atlantic 10 Conference Freshman of the Week.

He also tied for leading scorer with 15 points against Loyola University of Maryland on Dec. 29 and 16 points in the game against the University of Dayton on Jan. 14.

Hyland ranks with the Rams’ more celebrated recruits of recent vintage. He was twice All-State at St. Georges Technical High School in Middletown, Del., and was named Delaware State Player of the Year as a senior, averaging some 27 points per game.

Hyland is the latest in a decades-long line of freshmen with impact at VCU.

Undoubtedly the top freshman contributor during VCU’s Division I era (since 1975) was Kendrick Warren, who averaged 16 points and nine rebounds in 1991.

Warren, who played under Coach Sonny Smith, was a McDonald’s All-American out of Richmond’s Thomas Jefferson High School.

Prior to VCU’s rise to Division I status, Len Creech (George Wythe High School) averaged 24 points per game in 1966 when VCU was called Richmond Professional Institute.

Freshmen have always been eligible at VCU, which wasn’t the case nationally. Freshmen were not eligible at Division I schools until 1972-73 season.

Meanwhile, rookie phenom Hyland adds plenty of black and gold sparkle to VCU’s Siegel Center. And make no bones about it, he figures to keep ruffling the nets for seasons to come.