The show, which celebrates Black excellence in music, film, sports and philanthropy, was filled with speeches, songs, images of protests and celebrities honoring dozens of African- American men and women who have died at the hands of police in recent years by saying their names. 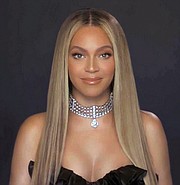 Beyoncé, who was given a humanitarian award by former First Lady Michelle Obama for her philanthropic work and COVID-19 relief efforts, dedi- cated her award to the Black Lives Matter movement and encouraged activists to continue to push forward.

Go vote, she said in a direct message to viewers.

“Your voices are being heard and you’re proving to our ancestors that their struggles were not in vain,” she said, urging people to use their vote in upcoming elections to dismantle “racist and unequal systems” across the United States.

“We have to vote like our life depends on it, because it does,” the superstar singer said.

The three-hour awards show, broadcast live for the first time in its 20-year history on America’s mainstream CBS channel, along with BET and BET Her, featured commercials from Coca-Cola, Ford, Nissan, P&G, L’Oreal and Facebook that both cel- ebrated the achievements of Black people and highlighted the challenges they face.

The show, hosted byAmanda Seales, was a mix of pre- recorded performances and virtual appearances because of the coronavirus pandemic that shut down production of televi- sion shows in mid-March.

A remixed version of veteran New York rap group Public Enemy’s 1989 anthem “Fight the Power,” featuring photos of the recent street protests, opened the show, whose slogan was “Our Culture Can’t Be Canceled.”

The performance featured group members Chuck D and Flavor Flav along with Nas, Black Thought, Rapsody and YG — who added lyrics to the song.

During the performance, video clips were shown of the national protests over the recent deaths of unarmed Black people, including George Floyd in Minneapolis, Ahmaud Arbery in Glynn County, Ga., and Breonna Taylor in Louisville.

The 12-year-old sensation Keedron Bryant also performed a cappella his anthem, “I Just Wanna Live,” a song about being a young black man that earned him a record deal.

Rapper Da Baby’s performance of “Rockstar” began with him singing while lying on the ground under the knee of a police officer, in a recreation of the May 25 death of Mr. Floyd in Minneapolis that sparked the global protests.

Newcomer Roddy Ricch wore a “Black Lives Matter” shirt, John Legend played his ballad, “We Will Never Break,” and Alicia Keys sang an emotional new song, “Perfect Way to Die,” about the many lives of African-Americans lost over the decades.

Awards went to Mr. Ricch’s “Please Excuse Me for Being Anti-Social,” which won album of the year, Megan Thee Stallion for best female hip-hop artist and Lizzo was named best female R&B/pop artist.

On a virtual stage, Lil Wayne paid tribute to the Black Mamba, honoring the late Kobe Bryant with a performance of his song “Kobe Bryant,” highlighting the NBA icon’s biggest moments. He paid tribute to Mr. Bryant who died in a helicopter crash in January that killed eight oth- ers, including his 13-year-old daughter, Gianna.

The singer weaved in new lyrics as Mr. Bryant’s No. 8 and 24 jerseys flashed behind him. His performance showed video clips of the Los Angeles Lakers star dunking on Dwight Howard and Steve Nash, hitting game-winning shots and highlights from his 81-point game against the Toronto Raptors in 2006.

Wayne Brady transformed from his normal actor-comedian self into the flamboyant character of the late Little Richard.

Wearing a gold glittery tuxedo, Mr. Brady put on his best emulation during a tribute to Little Richard, who died of bone cancer in May. He rolled around on top of a piano as he sang a medley of hits from Little Richard, considered one of the chief architects of rock ’n’ roll.