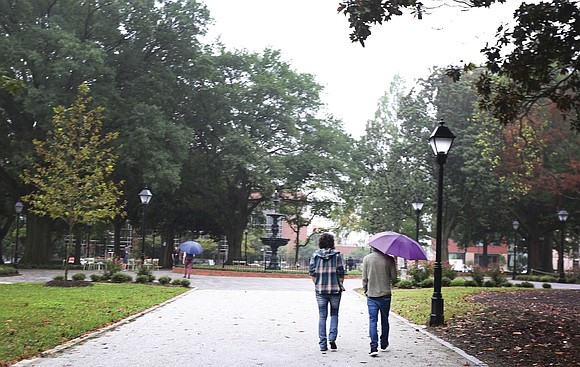 Does a nonprofit group authorized by City Hall to manage Monroe Park need a bailout?

That question is resonating after the Monroe Park Conservancy reported that its revenue fell nearly $264,655 short of covering expenses in its most recent financial report to the Internal Revenue Service.

The group, established in 2014 to be self-supporting and awarded a 30-year lease to manage the city’s oldest park, also reported a significant drop in its total assets, leaving it with virtually no cash or monetary backup to support its work, according to the report.

Alice McGuire Massie, who doubles as volunteer president and executive director of the conservancy, could not be reached for comment. Ms. Massie has not submitted any requests to the city for tax dollars to support the effort.

One reason for the problem is that a major corporate donor pulled back from giving to the conservancy, a public-private partnership whose 11-member board includes private citizens and representatives from the city and Virginia Commonwealth University.

Minutes show the conservancy was planning to raise revenue by leasing all or portions of the park for concerts and other money-making events this spring and summer, but the events had to be scrapped after the COVID-19 pandemic hit.

In 2016, the city joined with the conservancy on a facelift of the park, which was created in 1851 as the city’s first significant green space.

Monroe Park consists of about 7 acres bounded by Belvidere, Laurel, Main and Franklin streets on the edge of Downtown.

The city spent more than $4 million when the facelift project’s cost increased from $6 million to more than $7 million. The conservancy has reported raising more than $3.6 million since 2014 to help pay its share of the project’s cost and to cover continuing maintenance.

The conservancy took out a nearly $1.1 million loan to help cover its share of the project that the conservancy reported was fully completed last year. According to the financial report, the conservancy still owes about $530,000 on that loan.