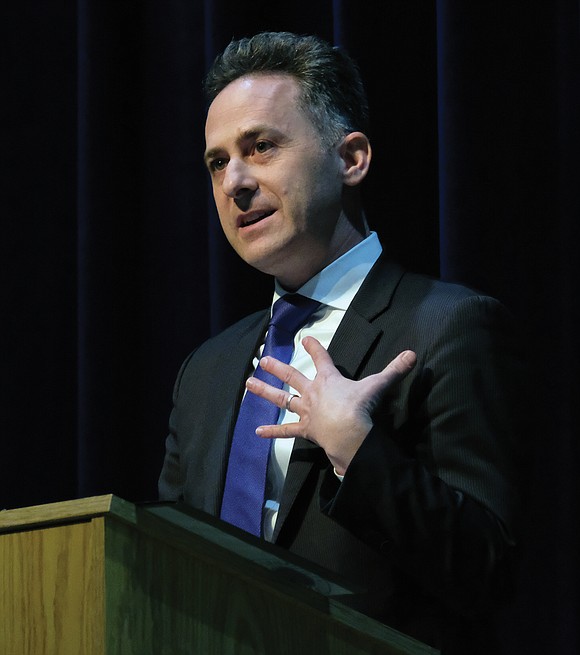 Richmond Public Schools “needs to end the Memorandum of Understanding with the police department and use more money for mental health in schools,” School Board member Kenya Gibson, 3rd District, said at Monday night’s board meeting.

She was supported by board member James “Scott” Barlow, 2nd District.

And during the 21⁄2-hour public comment portion of the meeting, an overwhelming number of parents, students and teachers demanded that RPS’ relationship with Richmond Police be severed.

School systems across the country have been questioning their ties with local police departments in the wake of the May 25 killing of George Floyd by Minneapolis police, raising questions about overzealous policing of young people that may be aiding a school-to-prison pipeline.

The board is in the process of gathering data on the arrests to determine if they were necessary and warranted.

Board member Elizabeth Doerr, 1st District, reminded the board of an incident last year outside Albert Hill Middle School when a city police officer cursed at three students from his patrol car. It was caught on video by a student.

The officer, a 15-year veteran of the department, was removed from patrol in the area. He also met with the students, their parents and school officials and apologized.

“Although Albert Hill does not have a (school resource officer), as part of the scope of our relationship with the police department, we need to understand how the police are interacting with our students” even when the police “are not physically in the schools,” Ms. Doerr said.

RPS Superintendent Jason Kamras said his staff will conduct a 90-day review of the district’s relationship Richmond Police, focusing their role and disciplinary function in schools, as well as researching potential alternatives.

The review will include feedback gathered from focus groups made up of principals, teachers, parents and students, with public hearings and data about disciplinary incidents over the years.

After the 90 days, the RPS administration will provide recommendations for the School Board to consider.

If school resource officers are eliminated, “what (security) would take its place to ensure that our students and schools are receiving the necessary daily safety and support?” Mr. Kamras asked, noting the questions that need to be addressed by the review.

The review also puts into question whether school resource officers will be used at the start of the 2020-21 school year.

Harry Hughes, RPS’ chief schools officer, said the resource officers are paid by the police department. RPS only pays overtime for the officers at after-school activities, such as football and basketball games, he said. That amounted to $48,000 last year, he said.

Ms. Gibson and Mr. Barlow said those dollars could be redirected to hiring more school counselors and mental health work- ers for the schools.

The School Board also received information from Mr. Kamras on reopening options under state COVID-19 guidelines. The board concentrated on options for in-person instruction with social distancing in classrooms, where the city hopes to be in September.

Surveys completed by parents, teachers and students indicated that most favor the option of having half the students in a school attend classes in the morning, and the other half in the afternoon, with a cleaning break in between.

The second most-favored option was for half of the students to attend classes on Monday and Tuesday, and the other half to attend on Wednesday and Thursday, with the school being cleaned on Tuesday evening. All students would have online virtual learning on Friday.

Another option is for half of the students to attend on Monday, Tuesday and Wednesday, and the other half on Thursday, Friday and Saturday. Officials said this schedule is contingent on a sufficient number of staff volunteering to work on Saturday.

The last option would have half the students learning in person, while the other half learn online for one week. Then the groups would switch the following week.

For all of the scheduling options, cleaning would occur between each class and on weekends.

Ms. Doerr also cautioned that whatever option is chosen must adhere to state Department of Education guidelines as well as the ability of RPS to pay for the changes.

She said it is important for families to have an array of options to consider and to know “their voices have been heard.”

Reopening options will be discussed again at the board’s next meeting on June 29.