Since switching from the CIAA to MEAC in 1997, Norfolk State University’s basketball team doesn’t come to the Richmond area anymore.

But that doesn’t stop Richmond area fans from going to NSU.

Coach Robert Jones’ Spartans will be relying on three athletes from the 804 this weekend when his team plays in the MEAC Tournament at the Norfolk Scope.

NSU is 16-15 overall, 12-4 in MEAC and the tournament’s No. 3 seed. The Spartans will play Coppin State University of Baltimore in the quarterfinals at 8 p.m. Thursday, March 12.

• Tyrese Jenkins, 6-foot-6, 205 pounds, fresh- man, from Henrico’s Varina High School: He made the MEAC All-Rookie team. He also led Varina to the state 5A championship in 2018.

• Daryl Anderson, 6-foot-6, 185 pounds, freshman, from Millwood School in Midloth- ian and The Miller School of Albemarle. The newcomer is 14-for-29 beyond the arc and was a recent MEAC Rookie of the Week. He paced The Miller School to the 2019 Virginia Independent Schools state final.

The senior transfer from St. Louis University averages 15.6 points — fourth in MEAC. He is first in the conference in 3-pointers per game (3.2) and second in free throws (84 percent).

Spartans overdue: NSU’s first and only MEAC Tournament title came in 2012. That was the same season NSU, as a No. 15 seed, upset No. 2 Missouri in the NCAA Tournament opening round.

The MEAC Tournament champion receives an automatic invite to the NCAAs. The likely destination will be Dayton, Ohio, for the NCAA "First Four."

Should NSU fall short at the Scope, the Spartans still may qualify for the National Invitation Tournament, or NIT, or for the Collegeinsider.com Tournament, known as the CIT. 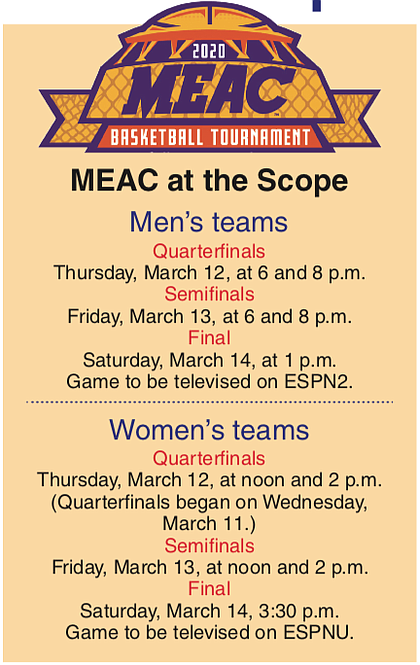