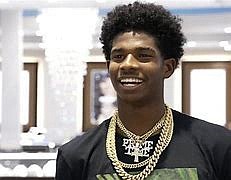 Now there are two Sanders to watch at Jackson State University in Mississippi.

Shedeur Sanders, an 18-year-old high school senior, has committed to the SWAC school to play football for his father, NFL Hall of Famer Deion Sanders, the newly named head coach.

A 6-foot-2, 200-pound quarterback, Shedeur originally committed to play at Florida Atlantic University but changed his mind when his dad got the Jackson State gig.

Sanders and Shedeur already have a close father-son relationship on the gridiron. For the past three seasons, Sanders has served as offensive coordinator at Shedeur’s high school, Trinity Christian School in Cedar Hill, Texas.

During that time, Shedeur passed for 8,935 yards and 123 touchdowns, while also rushing for 198 yards and 22 touchdowns.