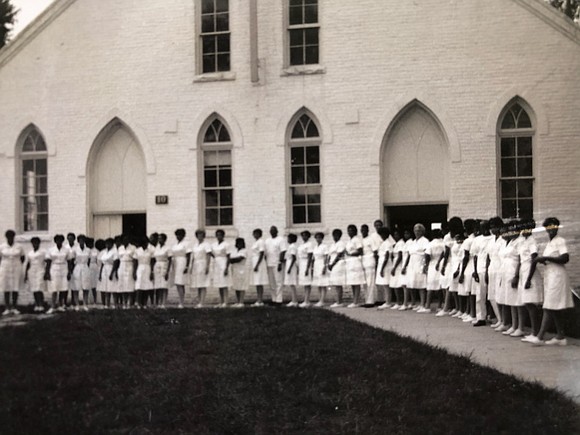 A graduating class of nurses in the 1960s stands outside the former chapel on Central State’s campus. The hospital had a program to train nurses during its history. The chapel building, which held social events and convocations, was demolished. Photos courtesy of Central State Hospital

A key part of African-American health and history in Virginia was celebrated last Thursday, as state health officials and professionals gathered online to commemorate the 150th anniversary of Central State Hospital outside Petersburg.

The virtual event was a significant shift in plans for the commemoration, which initially was to take place on the grounds of the hospital but was moved online because of the coronavirus pandemic.

“2020 is a year of celebration of services to individuals with disabilities and serious mental illnesses,” said Dr. Robert O. Forbes Sr., a psychiatrist and former medical director at Central State Hospital who retired in 2018. He is now a member of Friends of Virginia’s Central State Hospital, an interest and advocacy group. “It’s a year of celebration and heartfelt thanks to all those who have served.”

Central State Hospital’s origins can be traced to December 1869 when Edward Canby, a Union Army general and acting military governor of Virginia in the wake of the Civil War, ordered a former Richmond Confederate hospital be converted into a state asylum for African-Americans with mental illnesses.

A year later, the Virginia General Assembly incorporated it as a state institution, then called the Central Lunatic Asylum, and gave it a new purpose— to house and treat “colored persons of unsound mind” from across the state.

It was the first of its kind in the United States. At the time, it housed 123 “insane persons and 100 paupers, not insane,” according to the history.

Central State gradually grew over the years, moving from Richmond to Dinwiddie County on a sprawling farm purchased by the City of Petersburg. It was renamed Central State Hospital in 1894 and expanded through the decades to accommodate a wider variety of illnesses and conditions, including a geriatric treatment center for the chronically ill, a maximum security forensic unit where people referred by the court system are evaluated and treated, and facilities for the treatment of adolescents and patients needing alcohol and drug treatment.

A herd of sheep, being watched by patients and staff, take care of the grass in front of the hospital’s medical building, built in 1929. Patients worked on Central State’s farm as part of their treatment regimen. The farm was shut down in the 1960s.

In 1968, several years after the passage of federal civil rights legislation, the state of Virginia desegregated its hospitals, and Central State, which had been designated solely for the treatment of African-Americans, opened to all patients, regardless of race.

Currently, Central State Hospital has 229 patients and 829 full-time staff. In addition to its civil unit, it also houses the only maximum-security mental health unit in the state.

Throughout its history, Central State hosted a number of performers, including Louis Armstrong, to entertain patients and staff, nursing classes for African-Americans and a variety of community and volunteer events. Some activities served as both a way to build connections between Central State and Dinwiddie County and a coping method for patients. Those speaking at the commemoration often mentioned this legacy, praising Central State for its importance to Virginia then and now.

The S.T.A.R. mall, as it is now call, was built on the campus in 1962 as a chronic infirmary. It was repurposed in the late 1990s as a treatment and services space. In addition to hosting mental health treatment groups, the building contains a lab set up like a small apartment where patients learn skills to live independently. It also contains a library, beauty shop, canteen and clothing shop.

“I want to thank you for the work that you do to serve our most vulnerable Virginians and to treat them with compassion,” Gov. Ralph S. Northam said during his virtual address. “You are building on a 150-year legacy of service.”

As part of Central State’s commitment to that service, an agreement was reached with Virginia officials last year to build a new $315 million facility with more modern accommodations for patients and to address a number of technological and logistical concerns on the 543-acre campus. This includes increased security and safety, enabling better collaboration between staff and making Central State a greater part of the community, as detailed by Dr. Brandi Justice, interim chief executive officer of Central State Hospital.

However, those present at the anniversary commemoration made clear that the new facility wouldn’t make up the whole of Central State’s work, but would be a tool used in the service of others.

“We are not a building,” Dr. Justice said. “We’re a community and a people and that building is just going to make it that much easier to take care of the people we’re serving.”

Right now, the new Central State facility is still in the design phase, with construction projected to start in the summer of 2021, according to Alison G. Land, commissioner for the Virginia Department of Behavioral Health and Developmental Services.

During the commemoration, Central State officials, staff and supporters said they remain committed to ensuring a continuation of the hospital’s “150 years of consistent service,” as Dr. Forbes called it.