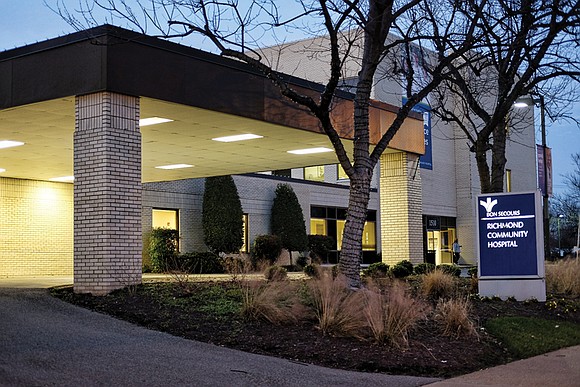 Richmond Community Hospital, located at 1500 N. 28th St., has been part of the Richmond community since 1902. It is now an arm of the Bon Secours Health System. Photo by Sandra Sellars

Is Bon Secours planning to close the small intensive care unit later this month at its 104-bed Richmond Community Hospital facility in the East End?

While Bon Secours officials deny the five-bed unit is being shut down, the Free Press has been told the eight nurses who have staffed the ICU around the clock — about 10 percent of the hospital’s 81 registered nurses — were notified last month that their services in the unit would no longer be needed after Jan. 22.

Rumors have been flying for months that Bon Secours planned to shut down the unit for critically sick and severely ill patients who need specialty care and close monitoring.

In response to a Free Press query, Mark Gordon, chief executive officer of Bon Secours Richmond East, reiterated Wednesday as he had in early December that the ICU is not being closed.

“Bon Secours is committed to offering the best care possible, including in the ICU, which remains open and operational. We have no intention of closing the ICU.

“We do however, as standard operating procedure, periodically assess current models of patient care in the ICU and throughout the hospital,” he stated. “Change is frequent in health care settings and is always aimed at what is best for the patient.”

The two veteran African-American physicians under contract with Bon Scours to provide coverage for the ICU, pulmonologists Dr. George A. Teekah and Dr. Lornel G. Tompkins, have not responded to calls and emails for comment.

However, sources in the Old Dominion Medical Society told the Free Press that the two doctors have been notified that Bon Secours is closing the ICU and has no plans to renew their contracts when they expire in May.

If the unit is shut down, it would reduce acute care services at the hospital, which admitted about 2,700 patients last year, according to data from Virginia Health Information.

And it comes as Bon Secours considers developing an $8.5 million medical office building near the hospital at 1500 N. 28th St.

Whether there is sufficient demand from physicians for Bon Secours to proceed is unclear. Sources told the Free Press that Bon Secours had hoped to attract the African-American physicians who once occupied the now demolished Belvidere Medical Center in Jackson Ward, but all have since relocated to other space or retired.

Bon Secours would have to pay the city $2.5 million over 10 years if it does not proceed with the office development. That’s one of the provisions in the deal the nonprofit, Catholic health care group inked with the city in 2013 to gain naming rights and medical office space in the Washington professional football team’s training camp on West Leigh Street.

Bon Secours already has sought to alter part of the performance agreement. Last month, it announced it was dropping plans to renovate the former Westhampton School in the West End into a home for its nursing school because the cost had doubled over initial estimates.

Bon Secours now is proposing to tear down the old school building and construct medical office space there, although there are suggestions that neither the community nor Richmond City Council will support that idea.