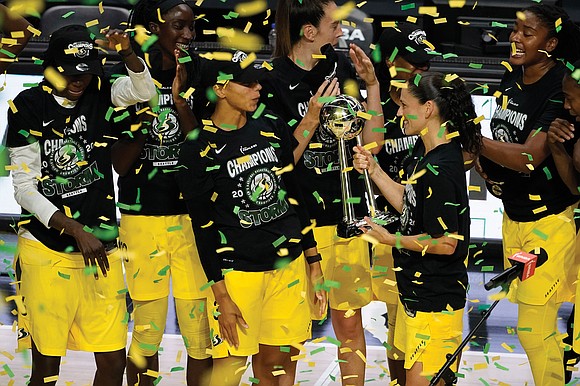 Seattle Storm guard Sue Bird shows the trophy to some of her teammates Oct. 6 after the team defeated the Las Vegas Aces to win the WNBA championship 2020, in Bradenton, Fla. Photo by AP Photo/Chris O’Meara

The Storm won their fourth WNBA title on Oct. 6 with a commanding 92-59 win over the Las Vegas Aces at the IMG Academy, aka “The Bubble,” in Bradenton, Fla.

All WNBA activities had been held in “The Bubble” since July 24, when the fractured sea- son resumed following a coronavirus pandemic time out.

Led by Finals MVP Breanna Stewart, ageless ball handling marvel Sue Bird and powerful Jewell Loyd, the Storm swept the Aces in the best-of-five games. The whopping 33-point margin in the final game was the largest ever.

Stewart and Bird, both from the University of Connecticut, and Loyd are all former No. 1 overall draft picks.

The 6-foot-4 Stewart hit 10 of 14 shots, including three of four from behind the arc, in scoring a game-high 26 points.

Bird, 39, had five points and seven assists and celebrated afterward with her partner, soccer

star Megan Rapinoe. In fact it was Rapinoe who gave the team its slogan, “We’re Chill.”

Loyd, nicknamed the “Gold Mamba,” was the first draft selection in 2015 out of the Uni- versity of Notre Dame. She had a loving bas- ketball relationship with the late Kobe Bryant, nicknamed the “Black Mamba,” who died Jan. 26 in a helicopter crash with his 13-year-old daughter, Gianna, and seven others.

“This is for Kobe, Gigi, the Bryant family and for Breonna Taylor,” Loyd said. “This is our first year without them ... and Kobe was the first to really believe in me.”

The Storm was 18-4 during the regular season and defeated the Minnesota Lynx, three wins to none, in the playoff semifinals.

The Storm joins the Lynx and the now-defunct Houston Comets as the only teams with four WNBA championships.