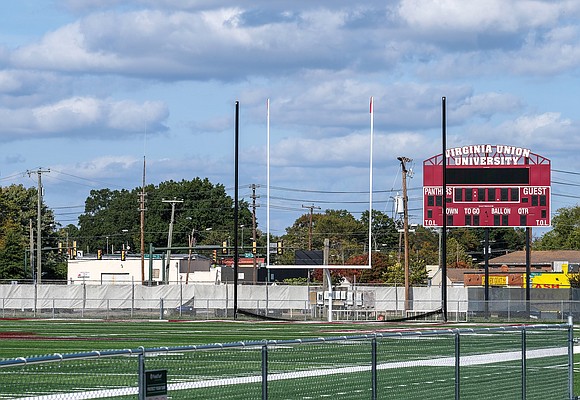 The initiative, called the “Honey Bear Project” after Lanier’s pro football nickname, is being done in partnership with FieldTurf, a major manufacturer and installer of artificial playing surfaces for athletic teams.

Area football fans have no further to look than Virginia Union University to see that the initiative is well underway. The newly laid field at VUU was installed during the spring and summer at a cost of $1.1 million and has been renamed Willie Lanier Field at Hovey Stadium.

It was ready for the 2020 football season, but the coronavirus pandemic interfered. VUU canceled football this fall because of the pandemic, but plans to resume play in the fall of 2021 on the new gridiron.

Lanier said he hopes to raise $50 million over the next two years to keep the project on the fast track.

“I’m excited about this project and I’m confident we will get the support,” he said. “Many of the football fields at HBCUs are in bad shape. Some, like the one at Virginia Union in my hometown of Richmond, are more than 100 years old and have never been replaced.”

Lanier Field at Hovey Stadium has been used for Panthers football since 1907.

Lanier stated that outdated playing surfaces at HBCUs place the schools at a competitive disadvantage.

“Poor surfaces make it tougher to recruit good high school players,” he said. “With these fields, I hope to leave a bigger footprint on the game of football—‘leveling the playing field’ for the nation’s Black colleges by replacing their old fields with new ones.”

Now 74, Lanier was a headliner for the Maggie L. Walker Green Dragons in the 1960s when most of the school’s home games were played down Lombardy Street at Hovey Field. He was a member of the Class of 1963. He then went to Morgan State University in Baltimore before embarking on a brilliant NFL career with the Kansas City Chiefs.