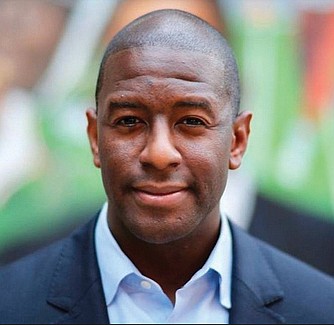 FORT LAUDERDALE, Fla. - Andrew Gillum, who narrowly lost his bid to become Florida’s first Black governor in 2018, told a television interviewer he is bisexual, responding to rumors swirling since March after he was found intoxicated, naked and unconscious in a hotel room with two men, including one who works as a male escort.

“I don’t identify as gay, but I do identify as bisexual,” Mr. Gillum told journalist Tamron Hall on her nationally syndicated television talk show, which aired on Monday. “And that is something that I have never shared publicly before.”

Mr. Gillum, a 41-year-old Democrat and former Tallahassee mayor, appeared on the show with his wife, R. Jai Gillum. They have three young children.

He did not return a call Monday from The Associated Press seeking comment.

He told Ms. Hall he began drinking heavily and secretly shortly after narrowly losing the November 2018 Florida governor’s race to Republican Ron DeSantis. He said he was even substituting whiskey for his morning coffee as a way to deal with his depression. He told Ms. Hall that he wasn’t sure he wanted to live anymore after a photo got out of him in a Miami Beach hotel room unconscious, nude and lying in a pool of his own vomit.

“I didn’t know that picture was out there,” said Mr. Gillum, who was an upset winner in the Florida 2018 Democratic gubernatorial primary and was the first African-American to be nominated for the office by either major party.

He said he first saw the photo after he checked himself into a rehabilitation facility the weekend after the March incident and he cried daily.

Mrs. Gillum said her husband told her before they were married 11 years ago that he was bisexual and she is upset that it is now public knowledge, telling Ms. Hall, “I don’t think it is anyone’s business.”

“I don’t think it is fair for people who are not heterosexual, who are not assumed heterosexual, that they should ever have to say or disclose what they are because of how judgmental people are,” she told Ms. Hall. “So many people just don’t understand bisexuality. They think they can wrap their heads around gay, but bisexuality is just something different.”

Mrs. Gillum said she wasn’t sure she would have married her husband if she knew his bisexuality would become public, because she was in her 20s then and wouldn’t have been able to handle it.

Mr. Gillum told Ms. Hall that he traveled to Miami to officiate at a friend’s wedding, arriving in town a day before his wife and friends to attend business meetings his aides had set up. He said that on March 12, he found himself drinking alone at a hotel bar, so he reached out to an acquaintance and wound up meeting him at a Miami Beach hotel.

Paramedics were summoned to a hotel room at 1 a.m. March 13 after a third man reported that Mr. Gillum’s acquaintance, 30-year-old Travis Dyson, had overdosed. Mr. Gillum said he blacked out three hours earlier after taking a drink and awoke to find police in the room.

Police said Mr. Gillum and Mr. Dyson were apparently under the influence of an “unknown substance.” Rescuers performed chest compressions on Mr. Dyson and he was taken to a hospital, where he recovered.

“Mr. Gillum was unable to communicate because of his inebriated state,” the police report stated.

Police said they found baggies of suspected crystal methamphetamine in the hotel room. Mr. Gillum told police then and Ms. Hall in their interview he was drunk, but did not use meth or other drugs and that drug tests taken that weekend prove it.

Mr. Gillum had stable medical signs and police drove him back to his hotel, where he got a ride to a rental house where his wife had checked in. He was not charged with a crime. One of the men he was with advertised online as a male escort. Mr. Gillum denied to Ms. Hall having sex with either man.

Mr. Gillum announced two days after he was found that he was entering a rehabilitation facility. He told Ms. Hall that he needed to get over “the shame” of what happened.

“I spent a lot of time embarrassed over what I don’t recall,” Mr. Gillum said.

David Johns, executive director of The National Black Justice Coalition, a gay civil rights group, said Monday that Black members of the LBGTQ community “can relate to the complex feelings” Mr. Gillum conveyed in his interview with Ms. Hall.

“Gillum’s reflections demonstrate that there must be space in our country for people to be themselves without shame and fear,” Mr. Johns said in a statement. “When we are forced by harmful societal expectations to operate in black and white, with no room to express the many gray areas of ourselves that make us who we are, we get hurt.”