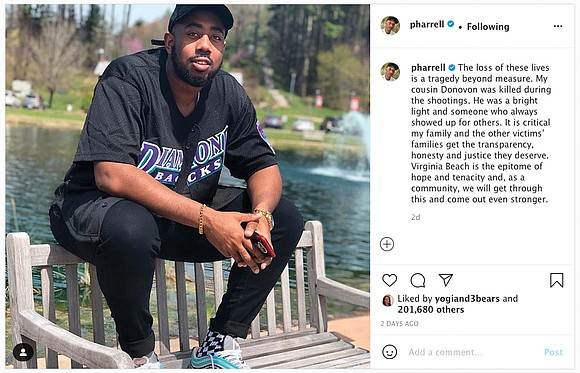 Virginia Beach native and Grammy Award-winning musician Pharrell Williams said Monday night that his cousin, Donovon Lynch, 25, was killed by police during a chaotic night of violence in the oceanfront city last Friday.

The NAACP and others, including Mr. Williams, called for an independent investigation into the series of shootings that occurred after 11 p.m. March 26 in which two people were killed and eight others were injured.

Mr. Lynch, a Virginia Beach resident, was a student-athlete at the University of Virginia’s College at Wise and an offensive lineman on the football team in 2017 and 2018.

Also killed was Deshayla E. Harris, 29, of Norfolk, who police described as an innocent bystander struck by stray gunfire.

Ms. Harris was one of the reality TV stars on the 17th and final season of “Bad Girls Club” on the Oxygen network. She was dubbed the “Firecracker Fashionista” on the show.

“The loss of these lives is a tragedy beyond measure,” Mr. Williams wrote and posted on social media. “My cousin Donovon was killed during the shootings. He was a bright light and someone who always showed up for others. It is critical my family and the other victims’ families get the transparency, honesty and justice they deserve. Virginia Beach is the epitome of hope and tenacity and, as a community, we will get through this and come out even stronger.” 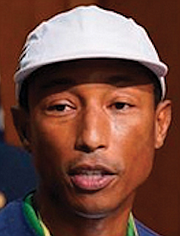 Mr. Williams, who is from Virginia Beach, has built up much goodwill in the resort city with his multi-day Something in the Water music festival that drew top performers and thousands of fans to the resort city in 2019. The event pumped millions of dollars into the city’s economy and tax coffers with festival-goers filling hotels, restaurants and retail shops.

The event was canceled in 2020 because of the coronavirus pandemic. It is being planned again for 2022, according to the festival’s website.

While the police department posted on its Facebook page photos of the weapons recovered after the shooting, others disputed that Mr. Lynch had a weapon.

“We are not surprised of the revelation that the body camera of the officer involved in the death of Mr. Lynch was not activated,” Karen Hills Pruden, president of the Virginia Beach Branch NAACP, said in a statement. “Disciplinary actions surrounding an officer misconduct shot not be withheld from the public under the pretext ‘it’s a personnel issue.’ This has been the case in the past. Transparency of police disciplinary is required now.”

The civil rights group accused the police department of failing “on all accounts.”

“The $5.5 million implementation investment on body-worn cameras is worthless when officers do not turn the camera on for recording,” Ms. Pruden stated. “Mr. Lynch is not here to tell his side! The officer involved has no reason to be forthcoming about any facts that places him in an adverse light.”

The NAACP also called for creation of a citizen review board with full investigative and subpoena powers, and want police officers who use deadly force to be reviewed by a statewide board tied to officer recertification credentials.

Delegate Jay Jones of Norfolk, a member of the Virginia Legislative Black Caucus who is challenging state Attorney General Mark Herring in the June 8 Democratic primary, called Sunday for an investigation by the attorney general into the shooting death.

“We need far better accountability and transparency, and the families of those killed by police, in Virginia Beach and across this country, deserve answers,” he tweeted.