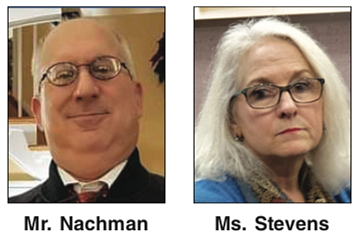 Did the Democratic-controlled Richmond Electoral Board break state law in trying to produce results after the Nov. 3 election amid challenges from COVID-19?

That is unclear and unproven.

The Free Press has learned, however, that the state Board of Elections held a closed meeting Wednesday to consider whether action against the Richmond board may be warranted after the Richmond Circuit Court referred a complaint it received from the Richmond Republican Committee.

Neither of the Democrats, Chairman James M. Nachman and Vice Chair Joyce K. Smith, were invited to participate in the closed-door session that revolved around the allegations the Republican city committee wrote up with support from the city Electoral Board’s Republican member, C. Starlet Stevens.

According to emails and documents obtained by the Free Press before the state board’s meeting, the GOP committee’s top two complaints involve actions taken after the polls closed on the Nov. 3 election, including an allegation that some of the sealed envelopes containing tapes from voting machines were opened prematurely.

The meeting takes place as the Richmond board prepares for the June 8 Democratic primary election as it moves ahead with appointing a replacement for veteran city Voter Registrar Kirk Showalter.

Ms. Showalter was fired Feb. 1 and is contemplating a lawsuit against the city board. Currently, Jerry Richardson, who had been the deputy registrar, is serving as acting city voter registrar. According to the Electoral Board minutes, all three board members voted to approve Ms. Richardson to fill the position on Feb. 26 although state law appears to require anyone appointed to fill the registrar’s post to be able to vote in the locality. As a non-city resident, Ms. Richardson cannot vote in Richmond.

Asked about the GOP committee’s complaint, Mr. Nachman and Ms. Smith told the Free Press they did not engage in any wrongdoing. Mr. Nachman called the allegations false and claimed the city Republican committee is pressing the complaints in retaliation for the Electoral Board’s dismissal of Ms. Showalter after 25 years of service.

One complaint involves the alleged premature opening of some of the sealed envelopes containing tapes from voting machines after polls closed on Nov. 3. Chief election officers at each precinct collect the tapes before locking up the precinct and take the envelopes in which the tapes are sealed to the city’s central elections office.

Those tapes contain the official results, with one set sent to the Richmond Circuit Court, one set given to the registrar to create a spread sheet with official tallies and one set going to the Electoral Board so it can check and correct any mistakes in the registrar’s figures.

The envelopes are to remain sealed until the day after the election when, according to state law, the board is to gather to begin the canvass or official counting process.

After the polls close but before the canvass, the chief election officials also are to call in election results to the registrar’s office to be reported to the state Board of Elections. The called-in numbers represent the unofficial results that get posted on the state website.

Mr. Nachman and Ms. Smith acknowl- edge that late on Nov. 3 and early Nov. 4, they went through some of the envelopes to get results from some precincts whose unofficial results were not called in.

Mr. Nachman said he consulted Ms. Showalter after results for at least six precincts remained unreported and the chief election officials could not be located. He said Ms. Showalter told him that the board could break the seals.

He said that two staff members watched him and Ms. Smith open certain envelopes, review the tapes for results and return the tapes to the envelope. Ms. Stevens had left the office, he said.

He said both he and Ms. Smith resealed the envelopes and both of them signed the new seal. The Republican committee has complained that action violated the procedure spelled out in the state code.

At a March 11 meeting of the city Electoral Board, the two Democrats voted to fire Ames Russell, a chief election officer who had worked for eight years. According to the city Republican committee, Mr. Rus- sell was dismissed because he complained to the state Department of Elections on Nov. 4 about his precinct envelope being opened before the start of the canvass and the tapes going missing, though they were found later in another envelope.

Ms. Smith said Mr. Russell was dismissed because he refused to accept her and Mr. Nachman’s statements that they had nothing to do with the premature opening of his envelope.

A second complaint involves Mr. Nachman’s completion of a portion of the canvass at his home.

At the time, the registrar’s office was shut down because of an outbreak of COVID-19. All the staff either tested positive or were in quarantine, including Ms. Showalter. Ms. Stevens also had the virus, and Mr. Nachman and Ms. Smith were in quarantine.

Mr. Nachman said Ms. Showalter swore in his wife, Kelly, as an elections officer. Then with his wife’s help, he said he completed the official tabulation of results precinct by precinct. He said he either filled in the figures that Ms. Showalter had not gotten to or checked his copy of the tapes against her figures to ensure accuracy.

He said that Ms. Stevens knew what he was doing and consented.

However, Ms. Stevens said she never consented to such an ad hoc procedure. She said Mr. Nachman should have allowed the chairs of the city Democratic and Republican committees to go to court for appointment of replacements.

Mr. Nachman said he does not read any requirement for such action in the state code.

Other issues also are being raised. During the public comment period at Wednesday’s state Board of Elections meeting, Ms. Stevens alleged that Ms. Smith sought to collect unemployment insurance for her position on the Electoral Board even though she was still receiving her monthly city stipend.

Ms. Smith told the Free Press last weekend that she sought unemployment benefits after being laid off last year during the pandemic from her full-time position as a systems analyst with a private company and, as required, included information about her part-time work as an elections official. She said the Virginia Employment Commission sent the information to the city even though she was not seeking unemployment from the city and was paid too little to qualify. She said the city’s human resources office notified her that the VEC mistaken sent the information to the city, telling her it happens regularly to others and that that office would straighten it out.

Ms. Smith said VEC still has her case under review.