Spotlight on board president of the Woodland Restoration Foundation 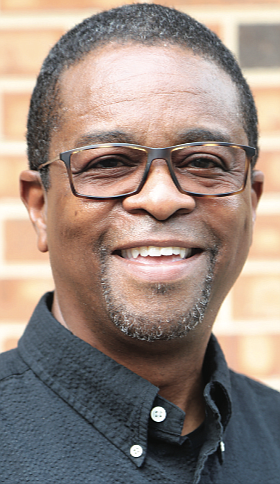 Largely because of the age and infirmity of its owner and caretaker at the time, the historic cemetery became overgrown despite its founding by crusading Richmond Planet editor John Mitchell Jr. and it being the final resting place of approximately 30,000 African-Americans, including such notables as tennis great Arthur Ashe Jr. and the Rev. John Jasper, founder of Sixth Mount Zion Baptist Church in Jackson Ward.

Ronnie Hicks is one of many who has taken to the grounds in recent years, looking to rectify that neglect.

The Chesterfield resident is board president of the Woodland Restoration Foundation, a nonprofit that acquired the 30-acre cemetery in mid-2020 and is dedicated to its restoration and preservation.

Mr. Hicks’ commitment to the project speaks volumes about the work being done on the historic site situated at 2300 Magnolia Road on the border of Richmond and Henrico County.

“We are stewards of our communities and we should hold ourselves accountable for preserving this important piece of our history,” Mr. Hicks says.

The roots of the foundation began in 2018 when efforts to reclaim and improve the grounds by local elementary teacher Kathleen Dooley Harrell and other concerned residents drew greater attention and community efforts to help Woodland Cemetery. This eventually led Marvin L. Harris, a real estate broker and leader in local efforts, to preserve these sites to form the Woodland Restoration Foundation and purchase the cemetery with the help of private donations and the Henrico County government.

Mr. Hicks got involved with Woodland Cemetery when the cleanup crew he volunteered with at nearby Evergreen Cemetery, led by Mr. Harris, realized that Woodland could use some help as well.

As board president of the nonprofit foundation, Mr. Hicks oversees the group’s ongoing mission and solicits needed supplies for their restoration and preservation work. His duties also include managing the operations of the organization.

While he carries a number of important responsibilities, Mr. Hicks is quick to stress the major contributions of other volunteers, as well as the potential for many more people to get involved.

“Everyone, no matter the skill level, can come out and contribute in some way,” Mr. Hicks says.

The foundation’s major goal is the complete restoration of the chapel at Woodland Cemetery, which had been used most recently as the cemetery office and to store equipment. The foundation also wants to build a visitors’ center where the 104-year-old cemetery’s history, and that of other cemeteries, can be presented.

To meet those goals, the foundation wants to bring greater community awareness to Woodland Cemetery and share the need to reclaim the site and other historic Black cemeteries across the nation. The foundation also seeks local and federal assistance in the form of legislation that would perpetually fund the cemeteries and preserve them.

So far, efforts are going well, according to Mr. Hicks, with a 10-year plan in place to improve Woodland Cemetery. In terms of challenges, Mr. Hicks sees funding as the major obstacle the foundation is facing, making donations that much more critical.

It helps, Mr. Hicks says, that Woodland Cemetery wasn’t in quite as poor a shape as some others when recent restoration and preservation efforts began.

But he’s also aware that other historic Black cemeteries deserve the same level of care, and he is hopeful that Woodland’s restoration process and its promotion can inspire others to get involved elsewhere.

“I view all of these places the same. They are the final resting places for our loved ones,” Mr. Hicks says. “It is important, no matter how big or small, that those places be preserved and that we find ways to do it.”

Where I live now: Chesterfield County.

Woodland Restoration Foundation is: A non-profit centered on the restoration and preservation of Woodland Cemetery, a historic African-American cemetery.

When and why Woodland Restoration Foundation was founded: In 2020, for the acquirement and preservation of Woodland Cemetery.

Why I became involved with Woodland Restoration Foundation: I migrated from Evergreen Cemetery after our cleanup crew, led by Marvin Harris, saw that our efforts were needed as well at Woodland Cemetery.

No. 1 goal or project: To complete restoration of the chapel and build a visitors’ center where the history of this and other cemeteries can be learned.

Strategy for achieving goal: To bring awareness to the community through the media and other platforms throughout the country of the need to reclaim these historic places that dot our landscape, and to seek local and federal assistance for legislation for perpetual funding to preserve these historically important places.

Brief history of Woodland Cemetery: In 1891, the Greenwood Memorial Association purchased 30 acres of farmland known as the “Hedge Plains” on the northern edge of the city to use as a cemetery. After some opposition from white land owners, the cemetery was closed down. In 1917, led by Richmond Planet editor John Mitchell Jr., the Woodland Cemetery Corp. was founded and acquired the Hedge Plains to open as Woodland Cemetery. A series of sales left it in the hands of the UK corporation by 1973. By that point, time and vandalism had taken a toll. In 2018, Kathleen Dooley Harrell, a local elementary school teacher, led a renewed cleanup effort assisted by Henrico County and Richmond city cleanup crews. Soon after, she was joined by Marvin Harris, who had successfully re-started the reclamation of Evergreen Cemetery. In 2020, Marvin Harris launched a GoFundMe campaign to raise money for the purchase of Woodland Cemetery from the Entzminger family. The Woodland Restoration Foundation was formed and successfully acquired Woodland later in the year with the assistance of Henrico County.

Cemeteries are: Holy ground and an important part of ev- eryone’s history.

Importance of maintaining Black cemeteries: We are stewards of our communities and we should hold ourselves accountable for preserving this important piece of our history.

How families can benefit from involvement with the Woodland Restoration Foundation: They get to see in real time the restoration of the final resting of many of their loved ones, as well as the satisfaction of knowing that they were a part of it.

Upcoming events: Weekly cleanups, usually on Saturdays. Most large cleanup efforts will be posted on the website. Everyone, no matter the skill level, can come out and contribute in some way.

How I start the day: Thankful that I have been given another gift — time.

Three words that best describe me: Caring, selfless and humble.

How I unwind: By working outside, and exploring new techniques for cooking on the grill.

What I have learned about myself during the pandemic: That during times of extreme adversity, I can find the strength to forge ahead.

Something I love to do that most people would never imagine: Race radio-controlled cars.

Quote that I am most inspired by: “Start where you are. Use what you have. Do what you can.” — Arthur Ashe Jr.

Best thing my parents ever taught me: The importance of looking forward not back- ward.

Person who influenced me the most: My grandfather.

Book that influenced me the most: “To Die for the People” by Huey P. Newton.

What I’m reading now: “The Lodge and the Craft: A Practical Explanation of the Work of Freemasonry” by Rollin C. Blackmer.

Next goal: Create a publication of grassroots resources in the community.