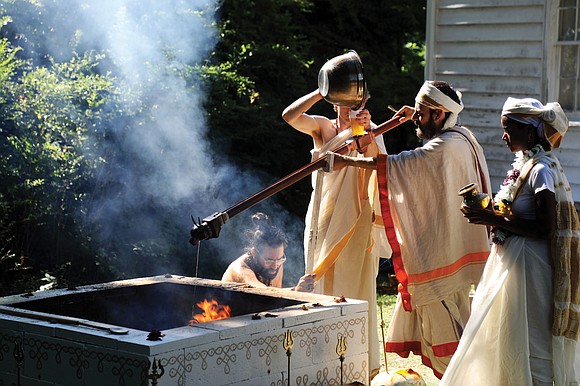 Neil Parmeswar, Grant Ottinger, Hindu priest Gananathamritananda Swamiji and Dominique Gay participate in a fire ceremony at Quietude, a former plantation in Hanover County, to heal the spirit wounds remaining from slavery and to bring peace and harmony to the site for the future. Photo by Regina H. Boone

A Hindu group that had hoped to build a temple on a former plantation in Hanover County held a ceremony last week to honor and bless the enslaved who had worked there and to heal the land that they now are selling.

Dominique Gay, who lives at Quietude plantation with her partner and Hindu priest, Gananathamritananda Swamiji, said the group has put the property up for sale after five years of dealing with obstacles and opposition in the county.

“It is because of discrimination and ignorance of the Hindu faith that we were not able to obtain a permit to have public prayer on this land,” Ms. Gay told the Free Press. “Neighbors have been very vocal in their opposition to us. They have told us that we have no legal rights in this county because we practice a ‘false religion.’ ”

Quietude Farm, as it is now called, is on the market for $400,000, according to Realtor.com. It is situated on 14 acres off McClellan Road in Eastern Hanover County. The main house, a two-story Colonial Georgian-style home with an English basement, was built around 1817, according to Ms. Gay, and was passed down through the Wade family to Confederate Capt. James Dudley Wade. Written accounts and archaeological finds suggest that both Confederate and Union encampments existed on the property during the Seven Days Battle in June 1962 and the Battle of Cold Harbor in June 1864.

Ms. Gay said evidence suggests that at least two African-American women were enslaved at Quietude, although records indicate an earlier owner from the late 1700s, James Geddy, had at least four enslaved laborers.

“We suspect that the enslaved workers may have slept in the loft above the old kitchen and that no dedicated slave quarters ever existed on the property,” Ms. Gay said, despite the remaining presence of several outbuildings.

Since purchasing the property in February 2016, the group has undertaken many repair and renovation projects to try to restore and preserve Quietude’s history. On a website dedicated to the farm, the group also talked about Quietude’s “great potential to serve our needs for a space to live, to farm for our herbal tea business and to provide a home base for the online teachings we provide.”

In addition to holding public prayer on the site, the group wrote on its website about plans to open the grounds and gardens for tours to raise money for its nonprofit operation.

Apparently, none of that materialized. And last week, a small group of people participated in a healing ritual, a mixture of Hindu Vedic tradition followed by a drummer and pouring libations to the ancestors in the African and Hindu traditions, as the group prepares to move.

The prayers are offered, Ms. Gay explained, to help release the energy of pain and suffering tied to the land because of those who were kept in bondage there and to increase harmony, prosperity, fulfillment and happiness.

The fire ceremony, called “yajnam” helps to purify the atmosphere and open channels for souls caught between realms to move toward the light, Ms. Gay said. The ritual removes negative energies and brings about “higher spiritual vibra- tions” of love, light, peace, health and prosperity for all.

During the ceremony, a continuous stream of clarified butter and milk was poured into the fire. Bags called “purna-huti,” meaning final offering in Sanskrit, and filled with herbs, grains, parched rice, flowers, fruit and coconut, were placed in bundles tied with white fabric and decorated with flower garlands. They were put into the fire, sending smoke and blessings into the air.

After the fire ritual, more prayers were offered to the ancestors as libations were poured to purify and bless the grounds. Ms. Gay said several thousand flower bulbs were planted nearby as a memorial to the enslaved at Quietude.

Prayers also were offered for the peace and harmony of future generations.

Contacted later, David P. Maloney, director of planning for Hanover County, said the group never submitted an application for a permit to build a temple on the property. He said Hanover officials recently gave the “go ahead” for a Buddhist temple to be built in the county.