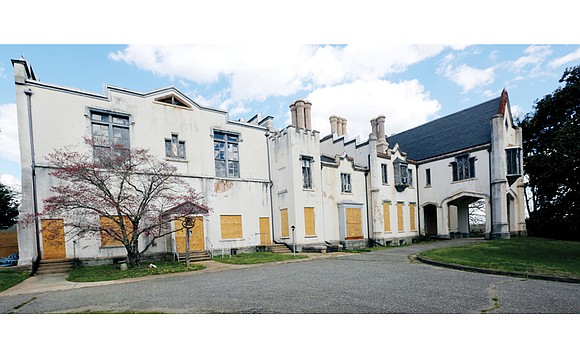 Belmead, the Powhatan County mansion that was once home to St. Emma Military Academy for Boys, now is boarded up. Nuns who manage the property have moved to a smaller building as leaders of their religious order, Sisters of the Blessed Sacrament, review bids to purchase the historic 2,200-acre property. Regina H. Boone/Richmond Free Press

A historic Powhatan County estate that was once home to two Catholic residential schools for African-Americans, including a military academy for boys, now belongs to a Petersburg area businessman.

The buyer is Jeff Oakley, president of Oakley Tank Lines, a Prince George County-based company that specializes in the transportation of liquid and hazardous chemicals. The company was started by Mr. Oakley’s father nearly 40 years ago.

The purchase price: $6 million, according to the county documents, or about $1.3 million less than the $7.3 million assessed by the county for tax purposes.

The sale ends the Sisters of the Blessed Sacrament’s 122 years of ownership of the property whose history includes pre-dates the Civil War as a tobacco plantation worked by 150 enslaved Africans.

The property was purchased in 1895 by the sister and brother-in-law of the order’s founder, now Saint Katharine Drexel, who donated it to the Sisters of the Blessed Sacrament in 1897 to assist St. Katharine’s mission to open schools for African-Americans and Native Americans.

Belmead was transformed into an agricultural and industrial training school for African-American boys and became one of more than 50 schools St. Katharine and the order founded and operated during the order’s heyday.

About 20,000 youths are estimated to have been educated at the schools that flourished until the civil rights era put an end to government-enforced segregation of schools and public places. Enrollment then declined, and the nuns closed both schools in the early 1970s. However, members of the order continued to live on the property until two years ago.

In the years since, St. Frances’ buildings fell into ruin and have largely been removed. The Belmead home that was St. Emma’s remains and is now listed on the National Register of Historic Places.

The nuns leased some of the property to farmers and allowed a private group to build stables to board horses and allow members to ride the trails that are a prominent feature on the property that overlooks the James River. More than 1,000 acres also have been put under the protection of a conservation easement.

Mr. Oakley bid on the property after the religious order, whose numbers have dwindled, announced in 2016 that it planned to sell the land to raise money to benefit their aging members.

The order first sought to sell to a nonprofit that alumni and supporters of St. Emma and St. Frances created in a bid to maintain the property as a cultural and conservation site.

But when that deal collapsed last year, the order returned to previous bidders such as Mr. Oakley. According to people involved, Mr. Oakley was the preferred buyer as he expressed interest in keeping the property intact and largely undeveloped.