Sisters act to save home 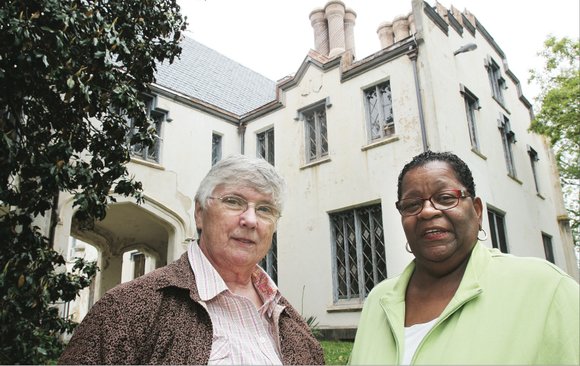 Sister Maureen Carroll, left, is seeking to rally public support to prevent the sale of a historic Powhatan property with help from volunteers like Joyce Johnson. The women talked about their plans in front of Belmead, the mansion that was once home to St. Emma Military Academy for Boys and has been headquarters for the nonprofit FrancisEmma Inc. that has sought to preserve and protect the property and its history. Photo by Sandra Sellars

Defying their superiors, four nuns are fighting to save the historic 2,265-acre property in Powhatan County that was once home to two Catholic boarding schools for African-American youths.

The nuns, who manage the property, are mounting a campaign to reverse the decision by the leaders of their order, Sisters of the Blessed Sacrament, to sell the land — although the prospects for upending the decision appear extremely slim for the nuns who are losing their authority to impact events.

The Free Press broke the story last week that the SBS, the religious order of nuns who ran the historic, but long-closed St. Francis de Sales School for Girls and St. Emma Military Academy for Boys, was putting the property on the market after 117 years of ownership.

The move shocked and surprised the order’s four nuns who live and work on the property, as well as the board of FrancisEmma Inc., the 12-year-old nonprofit that has worked to restore the property.

“We were blindsided,” said Sister Maureen Carroll, whom the SBS removed Tuesday as executive director of the nonprofit.

In response to the SBS’s sale decision, Sister Carroll said she and the three sisters have begun a petition campaign on Change.org and are using Facebook and sending email blasts to generate “an outpouring of support” to overturn the sale.

“This is very significant African-American history, and we need a big community response to help preserve it,” said Sister Carroll, who announced Wednesday that the nuns also would hold a rally 2 to 3 p.m. Saturday, May 14, at the property at 5004 Cartersville Road that overlooks the James River.

She believes popular support represents the only chance to get SBS leaders to reconsider disposing of the property that the order has long considered “sacred land.”

This cemetery is the burial ground for slaves who worked on the property decades before it was used for the education of African-American youths.

Opened in the 1890s, the two schools together educated and trained in practical skills at least 12,000 African-American students before both closed by 1972, Sister Carroll said.

“FrancisEmma wants to become independent and to buy the property, and we just need (the SBS leadership) to give us three to five years to come up with the money,” Sister Carroll said. “I know we could raise it.”

Still, she acknowledged that the public campaign is a long shot. Last week, she said, the order’s top leadership, including the president, Sister Donna Breslin, attended a meeting of the FrancisEmma Inc. board to inform members of the sale and to notify them that they no longer would play a role in decisions about the property.

“They said the board was dissolved,” Sister Carroll said, meaning current members essentially are to be replaced by people who would vote to sell. The four top leaders actually control FrancisEmma Inc. and appoint the board, she said, leaving displaced members few means to protest, she said.

Although removed as executive director, Sister Carroll has not received a reassignment order. Nor have the three other SBS nuns. Sister Carroll said that could be the next step. “Then each of us would have a decision to make about whether to accept reassignment,” she said. The other nuns are Sisters Elena Henderson, Beulah Martin and Jean Ryan.

Sister Breslin announced the sale May 3, along with the decision to dispose of the order’s Motherhouse near Philadelphia. The order has shrunk from 600 members to 104 in recent years, only 13 of whom are under age 65. Sister Breslin said the sale would redirect SBS resources to the order’s other projects.

Sister Carroll fears the story of the schools and the history of the site would be lost if the property is sold to a developer more interested in creating homes than preserving history.

“Today, we tell the story of the era of slavery before the schools, the era of empowerment when the schools were in operation and the current era of ecology and social justice,” she said.

The SBS has been involved with the property since 1899, when the order’s founder, St. Katharine Drexel, opened St. Francis at the former Mt. Pleasant plantation, also called “Rock Castle.”

St. Emma, also called “Belmead” was opened in 1895 by St. Katharine’s sister, Louise, and her husband, Col. Edward Morrell, and the property was later donated to the order.

Sister Carroll said the sales decision ignores the strong financial position of FrancisEmma Inc., which has covered all the costs of its operations since it was organized in 2004. FrancisEmma is “not financially pitiful. We don’t take a penny from the Motherhouse,” she said, “but in fact, we generate money for the Motherhouse.”

FrancisEmma, she said, has become self-supporting by earning money boarding horses at its stables, running a preschool, operating an environmental center, leasing part of the land to a farming operation and hosting weddings and other events.

The nonprofit also raises money from the sale of wood from a section set aside for a loblolly pine tree farm.

“We have invested in restoration of St. Emma’s, and just recently replaced the roof,” Sister Carroll said. “We are well on our way to raising the $7 million needed to restore St. Francis and take on the other needed projects,” she said, citing new grants recently provided by two foundations.

She said that FrancisEmma runs tours and has trained 11 youths and eight senior citizens as docents using a grant from the National Trust for Historic Preservation.

“We have 6,000 visitors a year,” she said. “The tragedy will be if the property is sold and the story of this land is allowed to disappear.”