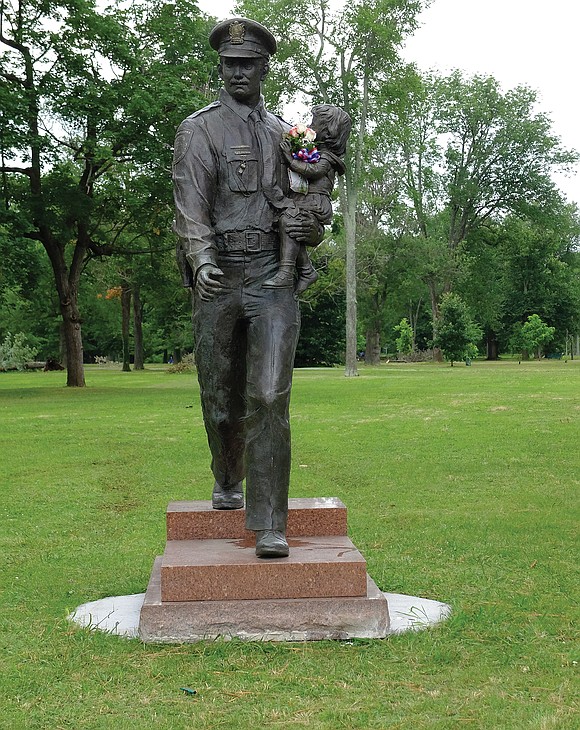 Move it to Capitol Square.

That’s where supporters of the Richmond Police Memorial statue want it to go.

A news conference is to be held 11 a.m. Thursday, July 29, beside the State Capitol to call for the 34-year-old statue to gain state protection.

For advocates, the memorial could be a replacement for the recently removed statue of arch-segregationist Harry Byrd Sr.

Glenwood W. Burley, a retired Richmond Police officer, is serving as spokesman for the initiative. He said moving the statue to the Capitol grounds would provide security for the too frequently vandalized piece of art that pays tribute to Richmond officers who have died in the line of duty since 1863.

“It also would be an appropriate site due to the 1870 disaster at the Capitol. Eleven Richmond police officers were among those killed when the second floor of the building collapsed,” Mr. Burly said. “This would be a fitting tribute to them.” He said that supporters would pay for the installation if Gov. Ralph S. Northam and the legislature agree to provide space for the statue.

Mr. Burley said the statue currently is stored in a warehouse to prevent further damage. He led the effort to move the statue from the grounds of the Richmond Coliseum to Byrd Park in 2016. But he said the statue was vandalized three times after it was set up and at least 11 times last year during the demonstrations against police abuse and racial injustice.

“It was hit with lacquer, spray paint, chemicals and everything else that could be thrown at it,” Mr. Burley said. “It took a month and $6,000 to clean it. We had to move it to a warehouse when we received intelligence that there were plans to knock off the head.”

Mr. Burley said private donors raised $30,000 to move the statue to the park and install it on a new pedestal. But he said the statue, created by Maria Kirby-Smith and that has been a Richmond fixture since 1987, is too much of a target at its park site and will never go back there.