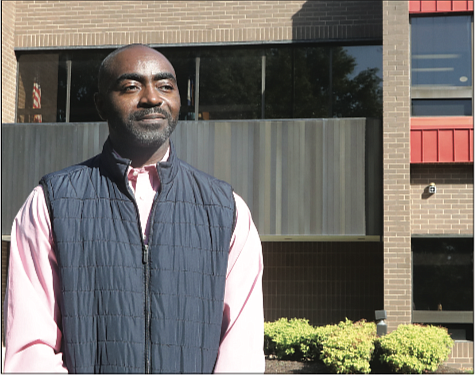 Keith Balmer will make history Monday, May 10, when he is sworn into a four-year term as Richmond’s new voter registrar amid the surge of work for the June 8 Democratic primary.

Mr. Balmer, 45, will be the city’s first Black voter registrar.

The North Carolina native also will be the first man in 50 years to hold the top election post in Richmond.

Most recently a state Department of Elections official, Mr. Balmer is returning to an office where he started his career at the bottom rung—working in the warehouse tending to the voting machines.

Describing himself as someone who “loves elections,” the Virginia Commonwealth University graduate said that he is looking forward to “serving voters and the community” and increasing the office’s visibility.

“I want to be out in the community,” Mr. Balmer said. “I want our office to have a presence at community events. I want to go to the high school civics classes to speak about voting and to encourage seniors to register.”

He also plans to reach out to community leaders “to see how we can work together” to increase voter registration and the participation of underserved communities in elections.

On April 13, a divided Richmond Electoral Board selected Mr. Balmer to lead Richmond’s election operations. He takes over from the acting registrar, Jerry Richardson, and is the permanent replacement for 25-year veteran J. Kirk Showalter.

Ms. Showalter was fired in February and has indicated she is contemplating a legal challenge. Ms. Showalter succeeded the late Alice C. Lynch, who also served 25 years as registrar.

Richmond Electoral Board Chairman James M. Nachman, a Democrat, and C. Starlet Stevens, a Republican and the board’s secretary, have been at odds over the ballot counting in the Nov. 3 election.

But they both agreed that Mr. Balmer was the best choice among four finalists. Board Vice Chair Joyce K. Smith, also a Democrat, backed another candidate and voted against Mr. Balmer’s selection.

An easygoing man, Mr. Balmer said he knows the staff and is not planning any significant changes. “I want to work with the people who are there,” he said.

He brings substantial experience to the post that comes with an annual salary of around $125,000.

During his early time in Richmond, Mr. Balmer rose from the warehouse to be involved in nearly every part of the voting operations. He learned how to maintain and test equipment prior to voting and delivered the equipment to the polls. He also has led training classes for election officers, worked as a roving official on Election Day to troubleshoot and served as an administrative assistant to the Electoral Board.

He also spent a year in the voter registrar’s office in Alexandria. For the past three years, he has served as the liaison between the state Department of Elections and 40 local offices in Central Virginia and the Northern Neck. His role has been to find answers to questions, assist in resolving problems and ensure election operations ran smoothly.

He said that he has read voraciously about elections, the process and its challenges “to learn everything I can.”

Mr. Balmer recalled Mr. Phillips getting up “at 4 a.m. every Election Day” to work at the polls. That dedication piqued Mr. Balmer’s interest.

He said that after Mr. Phillips’ death in October 2010, he called the Richmond office to see if he could take Mr. Phillips’ place at the polls for the upcoming Election Day. He was asked to come in for an interview and to his surprise, Ms. Richardson, whom he will replace, asked if he might be interested in working at the warehouse. Then unemployed, he said he was quick to accept.

“The more I was there, the more I got intrigued,” he said. “And the rest, as they say, is history.”