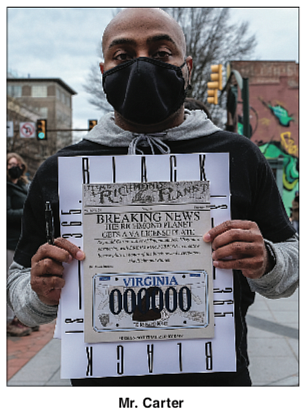 Coming soon: A new license plate bearing the Black power logo of a historic newspaper that fought lynching and other forms of oppression in Richmond and Virginia.

Richmond resident Reginald L. Carter, who single-handedly has led the effort to get a specialty license plate paying tribute to the Richmond Planet, announced success on Monday.

Mr. Carter told the Free Press that 450 vehicle owners have made reservations to purchase the plate that would be issued by the state Department of Motor Vehicles. 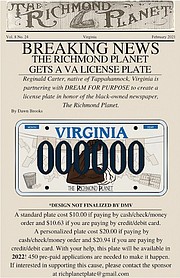 By state law, pre-orders of 450 plates are the minimum required before the General Assembly will consider passing legislation allowing DMV to produce them, Mr. Carter said. He said the state Senate and House of Delegates would consider the specialty plate during the 2022 legislative session. If a bill authorizing the license plates is passed as expected and signed by the governor, DMV would produce the plates after the bill becomes law on July 1, he said.

As Mr. Carter has detailed, the license plate will feature an upraised Black arm with a clenched fist that was featured on the masthead of the independent weekly newspaper that dared, as its famed editor, John Mitchell Jr., once wrote, “to hurl thunderbolts of truth into the ranks of the wicked.”

It is the latest triumph for Mr. Carter, a Virginia State University graduate from Tappahannock who also has a master’s degree from the University of Richmond. Mr. Carter, a human resources specialist at a state agency, also led the successful campaign that resulted in the Tappahannock Town Council voting to remove a Confederate statue from in front of the Essex County Courthouse.

He also led the successful effort to raise funds to pay for a state historical marker to honor the county’s lone lynching victim.

Mr. Carter, who found Richmond Planet articles on the lynching, was inspired by the coverage to create the specialty license plate.

Launched in 1882 by 13 former slaves, the Richmond Planet became the voice of the Black community after Mr. Mitchell became the editor two years later.

Mr. Mitchell, who also later was a banker and was an elected representative to city government for four years, ran the newspaper until his death in 1929, according to his Library of Virginia biography.

The crusading editor led the 1904 boycott of the city’s streetcar line after it segregated seating by race. The boycott led to the company’s bankruptcy, court records show. That led to the creation of a new owner and operator, which decades later became known as Dominion Energy.

Mr. Mitchell’s boycott, however, did not end segregated seating on public transportation. That finally ended in 1956 when the U.S. Supreme Court ruled in the wake of the Montgomery, Ala., bus boycott led by Dr. Martin Luther King Jr. that segregated seating was unconstitutional under the equal protection clause of the 14th Amendment of the U.S. Constitution.

The Planet continued to publish another nine years after Mr. Mitchell’s death before being sold to the Baltimore-based Afro-American newspaper chain, which operated the publica- tion as the Richmond Afro-American and Planet until it was closed in 1996.