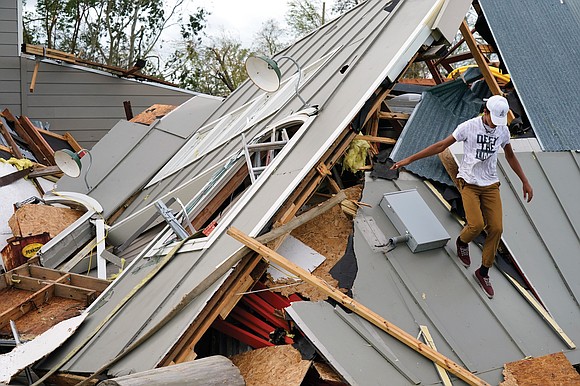 Jeremy Hodges walks Monday onto his family’s storage unit in Houma, La., an area that was devastated by Hurricane Ida that struck Sunday with winds over 150 mph. Photo by David J. Phillip/Associated Press

NEW ORLEANS - Lights came back on for a fortunate few, some corner stores opened their doors and crews cleared fallen trees and debris from a growing number of roadways Wednesday — small signs of progress amid the monumental task of repairing the damage inflicted by Hurricane Ida.

Louisiana Gov. John Bel Edwards said he was pleased that power had returned for some people, saying it was “critically important to show progress” after the storm. But he also acknowledged that much more work lay ahead.

“I’m very mindful that it’s a start, and only a start,” he told a news conference.

The death toll rose to at least six after a coroner confirmed a 65-year-old woman had drowned in her Louisiana home and police in Maryland said a 19-year-old man was found dead in an apartment complex flooded by heavy rain from Ida’s remnants. And the staggering scope of the disaster began to come into focus, with a private firm estimating total damage from Ida could exceed $50 billion.

Bands of the powerful storm struck Metro Richmond on Wednesday, resulting in downpours, some flooding and power outages.

Gov. Edwards said Louisiana was blessed to have only two deaths from Ida so far given the magnitude of the hurricane’s devastation.

In Southern Louisiana’s Plaquemines Parish, Gayle Lawrence lost two cars, refrigerators and almost everything in her garage to flood waters. Her garage was filled with marsh grass and dead fish. Scores of other homes in the neighborhood also were flooded.

“The house is solid. It didn’t even move. But when the water came up, it destroyed everything,” she said.

“Today we’re a broken community. It won’t always be that way,” President Sheng said after meeting with Gov. Edwards.

With all of New Orleans blacked out except for those running generators, Byron Lambert woke up startled at about 1:30 a.m. when light suddenly came on down the hall from where he slept. He first thought it was a burglar, then realized his home had electricity.

Mr. Lambert’s house in Eastern New Orleans was among more than 11,000 homes and businesses that had power restored early Wednesday, according to Entergy, the electric company.

“When it came on it startled me. I’m like ‘All right! We got power,’” Mr. Lambert said, his enthusiasm tempered by the knowledge of what others were going through. “I’m fortunate, but they have a lot of people that aren’t as fortunate as me, and I pray for them because it’s rough.”

There were still 989,000 homes and businesses without power, or 44 percent of all state utility customers in Southeast Louisiana, from the New Orleans area to Baton Rouge, according to the state Public Service Commission.

Phillip May, president and CEO of Entergy Louisiana, told reporters Wednesday he predicts “a lot more progress” in coming days. Still, he said full recovery will be slow, with thousands of power poles and transformers knocked out by the storm.

In neighboring Mississippi, 32,000 customers had no electricity.

Hard-hit areas in southeast Louisiana were under a heat advisory Wednesday, with forecasters warning combined heat and humidity could make some areas feel like 108 degrees.

Several organizations have launched efforts to help the victims of Hurricane Ida. Here are several that are accepting donations: