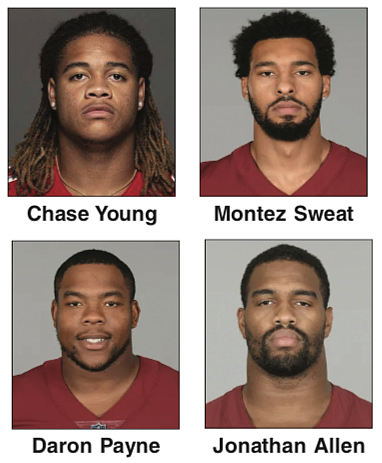 In searching for a nickname for the Washington Football Team’s vaunted defense, “The Roadblock” seems to fit.

In and around a city known for traffic backups, visiting teams—especially offensive players—might consider taking a detour when nearing the Bermuda grass inside FedEx Field.

The 2020 Washington Team had the NFL’s second stingiest defense in yardage yielded, and more of the same is expected this season under second-year Coach Ron Rivera.

An intimidating Washington Team front four, composed entirely of first round draft choices, represents the first line of defense opponents will face on Sundays. Rival quarterbacks are likely to get rubbery knees when eyeing this quartet of young and restless defensive linemen:

In winning the NFC East a year ago and nearly upsetting eventual Super Bowl champ Tampa Bay in the playoffs, the Washington sparkled on defense. Washington was second in yards allowed with 304.6 per game. Only the Los Angeles Rams were more impenetrable with 281.9 allowed.

The Washington kept teams off the scoreboard, too.

Washington allowed a paltry 20.6 points per game, trailing only the Los Angeles Rams, the Baltimore Ravens and the Pittsburgh Steelers in that category among 32 NFL teams.

The all-first-round front four is only one phase of Washington’s plan to deny opponents first downs and touchdowns.

The linebacker corps has received a notable boost in Jamin Davis, the team’s latest first round draftee (19th overall) from the University of Ken- tucky. Davis drew notice on the field, recording 102 tackles last season for the Wildcats, and at the NFL Combine.

Measuring 6-foot-31⁄2 and 234 pounds, Davis ran the 40-yard dash in 4.48 seconds and did a 42-inch vertical leap and 11-foot standing broad jump. That kind of size, speed and explosiveness is like adding a wrecking ball to the middle of an already powerful defense.

Washington’s secondary received a bold-letter addition, too, in cornerback William Jackson III, a first round draft pick by the Cincinnati Bengals in 2016.

As a free agent, Jackson signed a three-year, $40.5 million contract with the Washington in March.

The NFL has a rich history of great defenses with catchy tags.

To name a few, there was the “Fearsome Foursome” in Los Angeles, the “Steel Curtain” in Pitts- burgh, the “Gritz Blitz” in Atlanta, the “Killer B’s” in Miami, the “Doomsday D” in Dallas, the Jets’ “New York Sack Exchange,” the “Dome Patrol” in New Orleans, the “Legion of Boom” in Seattle and “Sacksonville” in Jacksonville.

It’s best when the nickname fits the city. “The Roadblock” fits D.C.