Inside Met Gala, where there’s always someone more famous 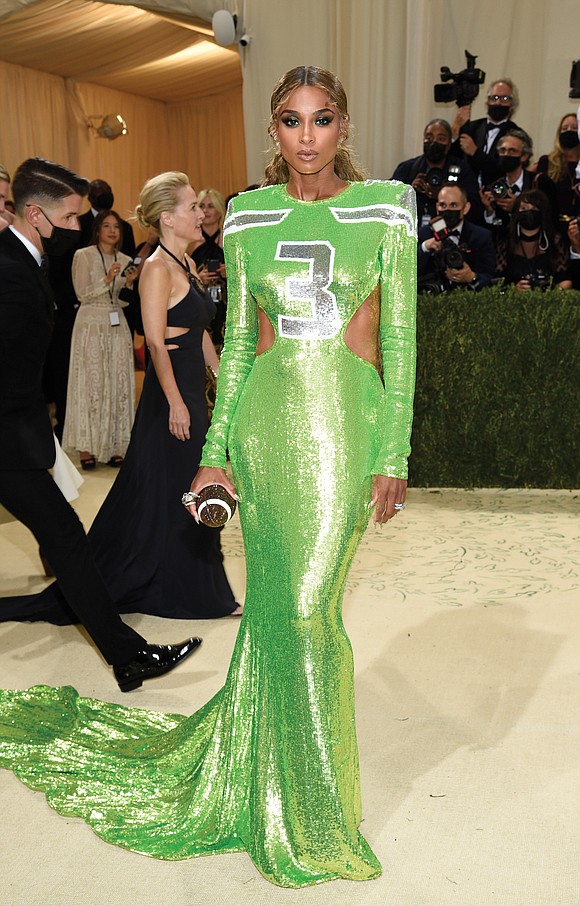 NEW YORK - U.S. women’s soccer star Megan Rapinoe had just gotten her beverage at the bar at the edge of the room. She looked back at the throbbing crowd of celebrities packed into the center of the airy Petrie Court, where the Met Gala was holding its cocktail reception.

Even for a world-renowned athlete, one’s first Met Gala can be a little intimidating— whoever you are, it seems, there’s always someone more famous (unless you’re Rihanna, maybe.) Rapinoe looked for a bit, and suddenly said, “Another athlete! I’m going over.” She headed in the direction of NBA star Russell Westbrook.

Ms. Rapinoe, who made a fashionably patriotic statement in her bright red silk Sergio Hudson pantsuit with a royal blue blouse emblazoned with white stars—she’d gotten the memo that the sartorial theme was American independence—had just been noting the preponderance of big athletes at this particular gala. “We’ve infiltrated,” she said with a grin.

Mr. Westbrook wasn’t the only NBA luminary. There was Steph Curry and his wife, Ayesha. Gymnasts were in the house, too. Simone Biles made a memorable entrance in an 88-pound embroidered gown with a huge train carried up the museum steps by six men. And Nia Dennis did an actual gymnastic routine to music from the Brooklyn United Marching Band.

But then, the museum was filled with screen and TV stars, too, and musicians, and luminaries of business and politics. In fact, an evening that had been casually billed as a “mini” gala — with the full-size gala to return in May — hardly felt “mini” at all, with 400 guests instead of the usual 550 or so. The cocktail reception seemed as packed as always, the mingling just as energetic.

Also as energetic: The attention from the crowds outside, packed behind barricades across Fifth Avenue and a block away on Madison, too, several rows deep. At one point, fans also had swarmed outside the Petrie Court’s full-length windows, hoping for a glimpse and a photo, and forcing museum staff to quickly move screens to the windows to block their view. 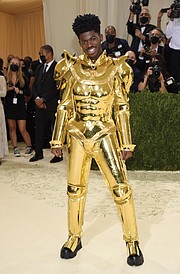 Still, there were reminders that this was no ordinary gala. The most obvious were masks, though few wore them during cocktails. (Guests had been reminded beforehand that masks were required, unless eating or drinking.) Participants also were required to provide proof of vaccination, and to take a rapid PCR test, administered by the museum either the day before or the day of the gala.

The smaller size had been a nod to pandemic restrictions, but there was clearly a need to bring in funds to make up for losses incurred in May, when the gala was canceled. (Tickets are estimated at about $35,000 per person.) The Costume Institute raises its own funds, and this gala had been presented as a way of signaling that not only the fashion industry and the Met, but New York itself was back, even as the pandemic still poses huge challenges.

Ms. Fernandez, the Canadian teenager who made a fairytale run to the U.S. Open final just as she turned 19, also called the evening an important sign of the city bouncing back. Ms. Fernandez had paid eloquent tribute to the city on the anniversary of the 9/11 attacks, in her runner-up speech last Saturday in the arena.

It was only after the final, Ms. Fernandez said at the cocktail reception, that her parents told her she’d been invited to the Met Gala. The invitation had come earlier in the week, but they hadn’t wanted to distract her“. When they told me, I just had this huge smile on my face and I was so excited,” said Ms. Fernandez, who was wearing a black-and-white Carolina Herrera cocktail dress. “I started laughing.” She again praised the city’s spirit. “Whenever I come here I feel electric, with this sense of energy,” she said.

Sitting on a bench in the reception was New York Congresswoman Carolyn B. Maloney, taking a break after killing it on the red carpet with an outfit calling for certification of the Equal Rights Amendment.

Not to be outdone by fellow Rep.Alexandria Ocasio-Cortez, her junior by four decades who wore a white gown with the message “Tax the Rich” on the back.