VCU grads told to ‘be disruptive’ 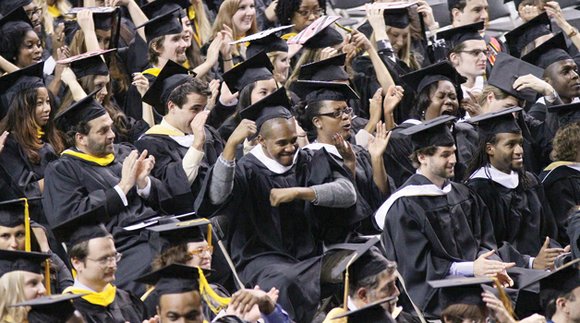 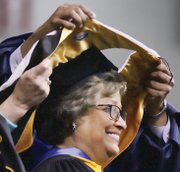 ay Coles James, founder and president of the Gloucester Institute who also served in the administrations of Gov. George Allen and President George W. Bush, gave the commencement address and received an honorary doctorate of humane letters.

“Take what you’ve got. Go be a leader and be disruptive.”

Ms. James, founder and president of the nonprofit Gloucester Institute that trains African-American youths for leadership, told the graduates to strive to be agents of change for a better world.

She urged them to fight mediocrity and to help transform the status quo.

Her remarks were made Saturday at the commencement ceremony at the Siegel Center.

“Based on what I see in the world, I want you to know that we need you. We need you now,” said Ms. James, former director of the U.S. Office of Personnel Management.

VCU President Michael Rao also called on the students earning diplomas and graduate degrees to use what they’ve learned to tackle life’s “unknowns.”

“The research we do here — which is the bedrock of your unique student experience — begins in the unknown, then becomes innovation, creativity and opportunity for people everywhere,” Dr. Rao said.

Along with the award to Ms. James, VCU also honored Eva Teig Hardy with the Edward A. Wayne Award for her contributions and service to VCU.

Ms. Hardy, a former Dominion executive vice president, was recognized for her service on the board of the VCU Health System and for her tenure as state secretary of health and human resources during the administration of Gov. Gerald L. Baliles.

Also, Dr. George Vetrovec, a heart specialist and professor of medicine in the VCU School of Medicine, and Dr. Richard Wenzel, a retired professor and former president of MCV Physicians, were awarded the Presidential Medallion. The medallion honors their efforts as educators and their commitment to VCU.