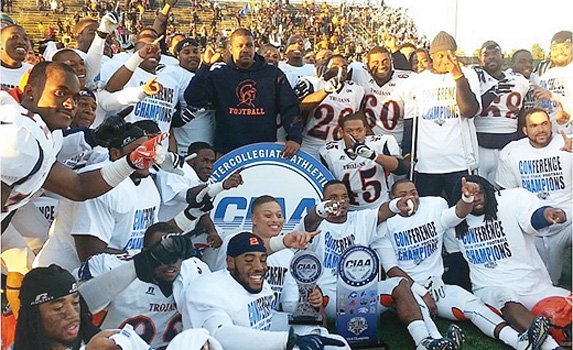 As a result, Virginia State University is the CIAA Football Champion for the first time since 1996 and eagerly awaiting its first-ever NCAA playoff game.

The finals of the 24-team tournament will be Dec. 20 in Kansas City, Mo.

Facing a juggernaut that had won 31 straight games against CIAA foes, Johnson shined with his arm (12-19, 125 yards), legs (13 carries, 76 yards) and even with his postgame comments.

On his game-winning, 25-yard touchdown with 2:59 left, he said: “When I saw the opening, it was like the Red Sea parting,” he said, referencing Winston-Salem State’s red jerseys.

Johnson out-dueled the Rams’ alternating quarterbacks, Rudy Johnson, an All-CIAA in 2013, and Phillip Sims, a former starter at Alabama and Virginia.

In his emergency role, Johnson was subbing for VSU quarterback Tarian Ayres, who was suspended from the title game following his arrest Nov. 9 in Waverly on charges of driving under the influence of alcohol, underage possession of alcohol and speeding.

VSU coach Latrell Scott (now 18-3 overall and 15-0 against CIAA foes) now must decide who will quarterback against LIU — Johnson or Ayres?

Ayres, who is second in CIAA passing yardage during the regular season, is expected to practice this week and will be available.

As a high school senior in 2012, Johnson led the Hermitage High Panthers to a 10-0 regular-season record, averaging 45 points.

Hermitage fell in the region playoffs, 24-20, to the L.C. Bird High School squad that went on to win the State 6A crown.

The Trojans’ defensive scheme against Winston-Salem State was spot on. The Rams averaged 38 points and 458 yards per game through 10 games. Against VSU, they settled for 17 points, 297 yards.

Time of possession favored VSU, 35:06 to 24.54, a tribute to defensive efficiency and Johnson’s game management.

“Coach Holmes has been everything we could ask for,” said Scott.

In Durham, Dontrell Jones started things in VSU’s favor with a 62-yard fumble return for a touchdown. And Tyrell Smith finished it, breaking up Sims’ final pass in the closing seconds.