Victorious VSU heads to Maryland to take on Bowie State 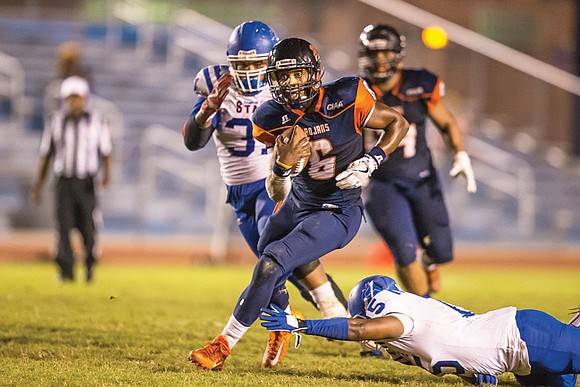 Quarterback Tarian Ayres runs the ball in to score for the Virginia State University Trojans during last Friday’s home game against Elizabeth City State University. The game was played a day early because of weather concerns. Photo by James Haskins

The first is scheduled for 1:30 p.m. when the Golden Knights, the U.S. Army parachute team, will make what promises to be a spectacular entrance into Bulldog Stadium.

The parachute team is the warm-up act for the main event at 2 p.m., when Bowie State quarterback Amir Hall commands center stage on homecoming weekend in Prince George’s County, Md.

The game will be shown on Aspire TV.

VSU is a hot team, but Bowie State — 4-2 overall, 3-0 in the CIAA — may be hotter, thanks to Hall, a 6-foot-4 redshirt freshman who leads the CIAA in passing by a huge margin.

Under first-year Coach Reggie Barlow, the VSU Trojans are 5-1 overall and 2-1 in the CIAA following a 44-38 win over visiting Elizabeth City State University in a game last Friday night at Rogers Stadium in Ettrick.

For VSU to return to the CIAA championship game for the third time in four years, the Trojans likely will have to win this Saturday’s game over the defending Northern Division champions.

Much has changed since then.

Coach Barlow has succeeded Byron Thweatt as VSU coach, and after sitting out last season, Bowie State’s Hall, aka “Air Amir,” has emerged among the nation’s most prolific passers.

Hall, also with four running touchdowns, is a hometown hero who grew up in Bowie, Md., and went to Riverdale Baptist School in Upper Marlboro, Md.

While Bowie State clearly has the premier aerial offense in the CIAA, VSU is just as prominent with its vaunted running attack.

On the season, VSU has accumulated 1,410 yards overland compared to opponents’ 641 yards.

Efficient quarterback Tarian Ayres, while averaging a modest 108 yards through the air, has thrown 124 passes without an interception.

In the Trojans’ victory over Elizabeth City State, Ayres connected with Christian Harden for a 29-yard touchdown. From Hermitage High School in Henrico County, Harden had four catches for 54 yards and has snagged a touchdown two straight weekends.

The game wasn’t as close as the score indicates. Elizabeth City State scored the final 22 points after VSU surged to a 44-16 lead early in the fourth period.

The Vikings’ Daquan Neal passed for 252 yards, but much of that came late against a VSU defense.

The VSU-Bowie State winner has gone on to win the Northern Division three straight years.

Bowie State lost to Winston-Salem State University in last year’s CIAA title game and then fell to Assumption College of Massachusetts in the first round of the NCAAs.

Those missing Bowie State’s “Air Amir” act in Maryland get another chance Oct. 22 in Richmond when the Bulldogs play Virginia Union University at Hovey Field.