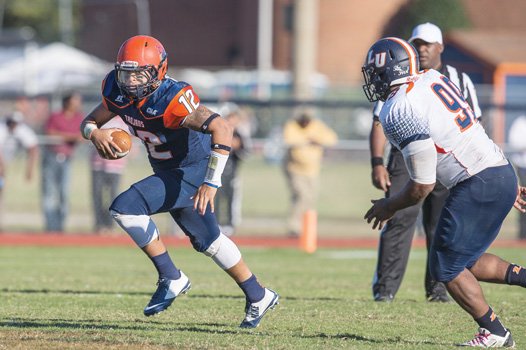 The Trojans extended their two-year conference winning streak to 12 with the 63-7 dismantling of Lincoln University last week before a homecoming crowd at Rogers Stadium.

VSU is the overwhelming favorite to extend its winning string to 13 this Saturday when another lightweight, Chowan, comes to Ettrick for Senior Day festivities.

Under second-year coach Latrell Scott, VSU has outscored its five league members by 205-84.

A year ago, the Trojans whisked aside seven in-house opponents by a cumulative 234-116.

After hosting Chowan, VSU travels to Virginia Union University on Nov. 8 for a season finale that may determine the CIAA North Division crown.

A VSU victory over Chowan and VUU loss at Elizabeth City State, however, could assure the Trojans a division title with one game still left on the slate.

The probable CIAA South winner, as usual, will be Winston-Salem State, now on a four-year conference winning streak. The Rams have been to four straight NCAA Division II playoffs, finishing as high as second in 2012.

The CIAA champion — to be determined Nov. 15 in Durham, N.C. — gains an automatic berth in the Division II tourney.

The Trojans were short on mercy in annihilating Lincoln.

On season, Hughes has 367 yards on 61 carries, a 6 yard average. Last fall, Hughes rushed for 3,128 yards and scored an incredible 45 touchdowns in helping L.C. Bird High School in Chesterfield County to the State 5A title.

Tarian Ayres didn’t need to throw often against Lincoln, but the sophomore from Buckingham completed seven of 11 aerials for 93 yards and two touchdowns to Jaivon Smallwood.

Ayres is third in the CIAA with 197.5 passing yards per game, while Smallwood is third in receiving yards, averaging 81.2 per last Saturday.

VSU’s last conference loss was at Virginia Union in the final game of the 2012 season. That also was coach Andrew Faison’s final game on VSU’s sidelines.

The Trojans are ranked eighth in this week’s NCAA Division II Super Region One poll. Winston-Salem State is ranked fifth.

VSU’s losses are to California, which is ranked No. 3 in Region One, and to Lenoir-Rhyne, No. 2 in Region Two.