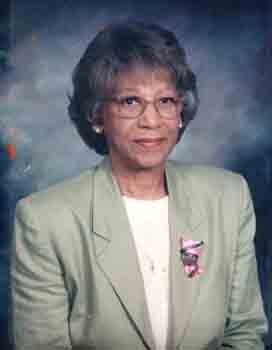 “She was the quintessential caregiver.”

That’s the loving recollection state Sen. A. Donald McEachin of Henrico County had of his mother, Edna Hamilton McEachin.

“She thrived on taking care of me, my three children and then, later, my dad as he got sick,” said Sen. McEachin, an only child.

“She spoiled me to death.”

Family and friends will celebrate her life at a homegoing service 11 a.m. Saturday, Nov. 29, at St. Philip’s Episcopal Church, 2900 Hanes Ave. on North Side.

When the longtime Richmond attorney decided to make his first run for political office for the House of Delegates in 1996, Sen. McEachin knew his mother would be the first person to line up in his corner.

“My mother was always very supportive,” he said. “She never pushed me in any direction. She just supported everything I did. She was always that steady rock that you could rely on.”

She was the first African-American banker at Central National Bank in Richmond, Mr. McEachin said. She also was a librarian assistant at Armstrong High School and taught special education for more than a decade at Thomas Jefferson High School before retiring in 1989.

Mrs. McEachin was born in 1927, one of three sisters, in Miller’s Tavern, a small community in Essex County.

She attended segregated John Moncure School, where her father, the Rev. Aston Hamilton, was principal.

Mrs. McEachin was a committed, lifelong member of Alpha Kappa Alpha Sorority. She also was a founding member of the James River Valley Chapter of The Links Inc.

Mrs. McEachin is survived by her son and daughter-in-law, three grandchildren and a host of other family members.