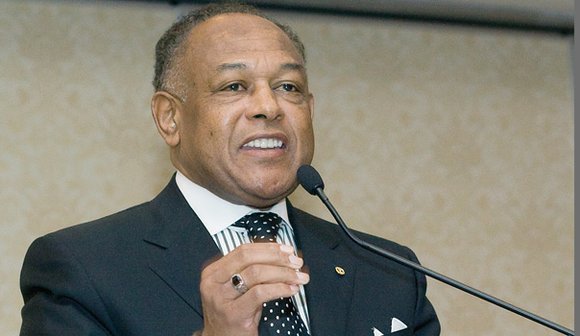 With his highly controversial stadium plan still on hold, Mayor Dwight C. Jones is now seeking to boost his popularity with a familiar politician’s ploy — a tax cut.

On Tuesday, he called on City Council to cut the real estate tax rate by a penny as “a tool to help attract and retain families in the city.”

It would be the first reduction in seven years, he said, and his first opportunity to provide tax relief since taking office in 2009.

The city has struggled with reductions in property values since the Great Recession hit in 2008.

He said he would introduce the proposal at council’s meeting, Monday, Sept. 8. Each penny of real estate tax is equal to about $2.1 million in revenue for the city.

However, the mayor, who promoted his stadium plan as a way to generate more tax revenue for a cash-strapped city, is already getting pushback.

One of his strongest allies on the governing body, Council Vice President Ellen F. Robertson indicated that she is unenthusiastic about a tax cut given the city’s needs.

“With the continual demand for funding critical obligations,” the 6th District councilwoman wrote in an email, “offering an average reduction of $20 per household is less attractive in comparison to improving the trash pickup, paving more streets, reducing blight, keeping alleyways clean, cutting the grass, not to mention the huge demands to address our public housing, schools, public transportation and fleet.”

Ms. Robertson also expressed concern that the mayor went public without first advising council members. “This is another surprise. I am disappointed that the means of doing business in the city is through these ‘pop-up’ decisions without any background discussions to determine what is best.’”

The issue would have popped up in any case.

Rising property values in Richmond are forcing the city government to consider a cut in the real estate tax, the city’s biggest revenue producer. The city generates more than $220 million from that tax rate.

In July, City Assessor James Hester notified Mayor Jones and the council that citywide values were up nearly 2 percent and could rise 3 percent when new construction is considered.

That rise is triggering the state’s rollback law. That law limits local governments to a 1 percent yearly increase in tax revenues from real estate and automatically rolls back the tax rate to the level to achieve that unless the governing body holds a public hearing and votes to maintain a higher rate.

Unaware of the mayor’s proposal, Councilman Parker C. Agelasto, 5th District, has made sure the council debate would be more robust.

Last Friday, he introduced three measures to ensure that council could consider all of the options and make its own decision before the city was subject to an automatic rollback.

Mr. Agelasto said the measures had to be introduced now or the council, which is only meeting once a month, might have been forced to accept the state’s rollback rate.

“We have to vote 30 days before” the city assessor certifies his land book, which is expected to happen around Nov. 15,” he said. He said the last meeting for the council to act on setting the real estate rate would have been the first Monday in October.

Had Mr. Agelasto not introduced all three options, the mayor’s proposal would likely have been the only one the council could have considered.