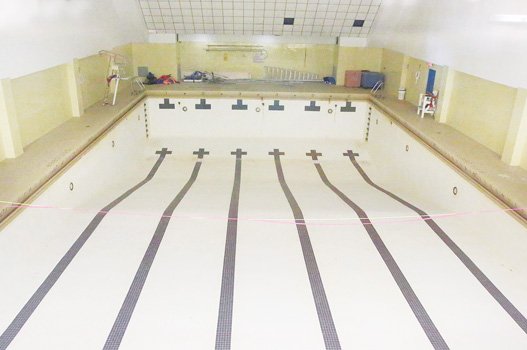 The indoor pool at the Calhoun Family Investment Center sits dormant and dry. The Richmond Redevelopment and Housing Authority closed it in May 2013 because of lack of repair funds. Photo by Sandra Sellars

It’s hard to make a splash at the Calhoun Family Investment Center.

For the last 16 months, the facility in the Gilpin Court public housing community has had no water in its indoor pool.

“The pool is closed. I don’t know exactly why. It might open again, it might not,” Annie Mahdee, president of the Gilpin Court Tenant Council, told the Free Press.

The closure leaves Gilpin Court residents without a resource that was once well used for recreation and health.

The indoor pool was home to a scuba club, the Black Dolphin Divers, along with a swim team. It also was available for water aerobics — and plain old fun.

The city is left with just one currently operating indoor pool, Bellemeade. Its outdoor pools are closed during the school year.

The Richmond Redevelopment and Housing Authority is responsible for the Calhoun Center’s operations. The facility offers various services for the general public, including a gymnasium and Internet access.

However, there are problems in the building, including with the pool. In some parts of the building, the air conditioning doesn’t work.

The pool, constructed in 1972, normally operates year-round. But it has needed extensive repairs since May 2013, according to RRHA.

“Due to the rising costs of repairs and upkeep, which were estimated at approximately $2.65 million, RRHA had to make a difficult decision to close the pool,” the agency stated in an email to the Free Press.

STEP, a faith-based nonprofit, was founded in 1983. The organization provides education and employment services in Gilpin Court and leases office space at the Calhoun Center from RRHA.

Mr. Cole said the pool’s closure hasn’t affected his organization’s operations, but problems with the Calhoun Center’s air conditioning have.

He said the cooling system in STEP’s office stopped working after someone stole copper pipes from the building’s exterior.

RRHA stated that repairs to the air conditioning are under way, with completion expected in about four weeks.

Ms. Mahdee said she has lived in Gilpin Court for 44 years, and has been president of the Tenant Council for about 16 years.

She told the Free Press that several people have asked her when the Calhoun Center pool would reopen.

“I don’t have anything to tell them,” she said.

Gilpin Court was named for acclaimed black actor Charles S. Gilpin, a Richmond native. It opened in 1942, making it the oldest of Richmond’s 11 public housing developments.

It also is the largest, with 2,015 residents as of June, according to RRHA.

In 2008, RRHA announced a plan to raze Gilpin and replace it with mixed-income private housing.

So far, nothing has come of the plan, which officials said would take five to 10 years to complete.