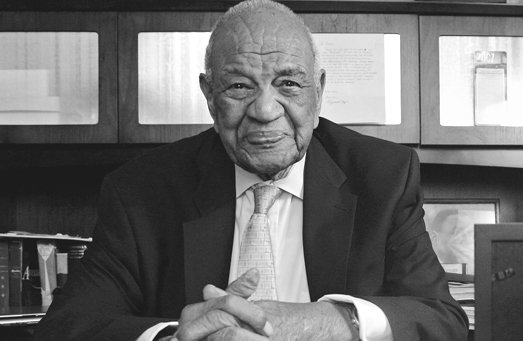 Dr. Gardner C. Taylor, widely considered the dean of the nation’s black preachers and “the poet laureate of American Protestantism,” died Sunday, April 5, 2015, after a ministerial career that spanned more than six decades.

“Dr. Taylor was a theological giant who will be greatly missed,” the Rev. Carroll Baltimore, past president of the Progressive National Baptist Convention, said of the minister who received the Presidential Medal of Freedom in 2000.

PNBC President Rev. James C. Perkins said Dr. Taylor “transformed America and the world for the better. How appropriate it is that God called Dr. Taylor home on Resurrection Sunday. In both life and death, Dr. Taylor gave a clarion call to the transformative power of the Gospel of Jesus Christ.”

Concord Baptist Church of Christ, the imposing, block-long, brick church Dr. Taylor pastored for 42 years, became a beacon of hope and vitality for many African-Americans in Brooklyn, N.Y., and a model for the nation. When the church was destroyed by fire in 1952, Dr. Taylor defied naysayers by not only rebuilding the edifice, but also doubling its size.

Concord, one of New York City’s largest churches, operated its own elementary school, nursing home, credit union and million dollar endowment used to invest in the community. But for more than four decades, it was Dr. Taylor who made Concord’s pulpit “the most prestigious in black Christendom,” proclaimed author and scholar Michael Eric Dyson.

He described Dr. Taylor’s preaching style as a blend of technical aspects, brilliant metaphors and an “uncanny sense of rhythmic timing put to dramatic but not crassly theatrical effect.”

The tall, charismatic pastor was renowned for the memorable sermons he spun from tales, anecdotes and Scriptures, but rarely captured in manuscripts. Dr. Taylor, a preacher’s preacher, kept his thoughts in his head before ushering them forth, and kept a black pocket Bible handy when he wanted to refer to the sermon’s Scripture reading for the day.

Rev. Richardson, who first heard Dr. Taylor preach when he was a student at Yale Divinity School in 1984, said, “It’s his presence and I mean, everything about him preaches … his mannerisms, his sincerity, his love of God, love of Scripture. … When he mounts the pulpit, one immediately feels they’re in the presence of someone who is truly gifted.”

There is a divinity school series, the Gardner C. Taylor Lectures in Black Preaching at Duke Divinity School, and a street in Brooklyn named for Dr. Taylor.

Dr. Taylor also will be remembered for a thorny page in black Baptist history struck by his allegiance to civil rights leader Martin Luther King Jr. during a tense time in the National Baptist Convention USA. In 1960, Dr. Taylor, Dr. King and other black ministers split from the denomination after a fierce debate over Dr. King’s civil rights agenda, which many black clerics of the day thought was too politically liberal. As a result, Dr. Taylor and other King supporters seceded from the convention and formed the Progressive National Baptist Convention, of which Dr. Taylor was once president.

Those were troublesome days for Dr. Taylor, who said he lost friends as a result of the split, but his fervent preaching and ministry never waned.

When he was asked during an interview about what makes a great preacher, Dr. Taylor responded, “In the Book of Ruth, Naomi says, ‘I went out full, and I’ve come back empty.’”

In 2011, Dr. Taylor described what principles contribute to someone being a great preacher.

“I think the secret of preaching is a deep religious conviction, a knowledge of the Bible and the attempt to express it as well as one might,’’ he said. “I think that is the difference between the ordinary and the extraordinary.”