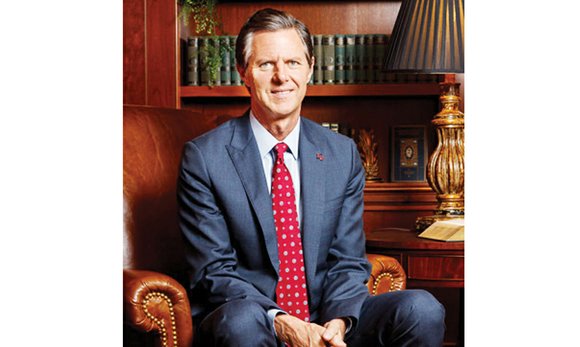 Liberty University President Jerry Falwell Jr. has urged students to carry concealed weapons on campus to counter any possible armed attack, saying that “we could end those Muslims before they walk in.”

“Let’s teach them a lesson if they ever show up here,” Mr. Falwell told students at the private Christian school Dec. 4.

His remarks make him the first president of a Virginia college or university to urge students to arm themselves and put him among the first in the country to do so.

Then on Wednesday, Mr. Falwell announced the university will overturn its policy prohibiting firearms in residence halls.

The question of having more armed people on the campus has been a subject of debate particularly since the 2007 massacre on the campus of Virginia Tech, when a mentally ill student killed 33 people including himself.

Mr. Falwell was met with rousing applause from students, but some later said he went too far when he appeared to be referring specifically to Muslims.

“I’ve always thought if more good people had concealed carry permits, then we could end those Muslims before they walked in,” Mr. Falwell said.

He told the Associated Press on Saturday he was specifically referring to Syed Farook and Tashfeen Malik, the couple who shot and killed 14 people during a holiday party Dec. 2 in a Southern California office building.

Mr. Falwell also said later, “There are many good Muslims, many good moderate Muslims.” He also said he believes it was clear that he was talking about the attacks in California and Paris.

He said he believes the Lynchburg campus needs to be prepared in the face of the increasing frequency of mass killings, such as the Virginia Tech slayings.

“What if just one of those students or one of those faculty members had a concealed permit and was carrying a weapon when the shooter walked into Virginia Tech? Countless lives could have been saved,” he said.

Mr. Falwell said the university is encouraging responsible gun ownership, not just pushing the idea of armed students. He also said he has decided to carry a gun after recent attacks.

“My administration is committed to making Virginia an open and welcoming Commonwealth, while also ensuring the safety of all of our citizens. Mr. Falwell’s rash and repugnant comments detract from both of those crucial goals,” Gov. McAuliffe stated in a written response.

“Those of us in leadership positions, whether in government or education, must take care to remember the tremendous harm that can result from reckless words,” Gov. McAuliffe added.