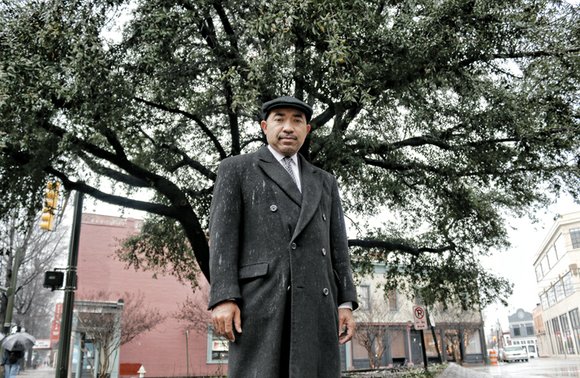 Gary L. Flowers stands Wednesday in front of the oak tree he wants removed from the site of the proposed Maggie L. Walker statue. Location: Broad and Adams streets at the intersection with Brook Road, a gateway into Jackson Ward, the historic center of Richmond’s black community.

The fight over the tree in the planned Maggie L. Walker plaza isn’t over.

Gary L. Flowers, a Richmond native and national political and civil rights operative living in Jackson Ward, has jumped into the fray with a petition drive opposing the live oak that now dominates the gateway into Jackson Ward where the monument to the great lady is to stand.

Mr. Flowers said his goal is to “galvanize support to honor Mrs. Walker in her full glory unencumbered” by the trunk and branches of the tree in the triangular Downtown park at the intersection of Broad and Adams streets and Brook Road.

Chief among Mr. Flowers’ reasons: The tree would be a symbolic affront to Mrs. Walker, a business leader whose contributions are legion in the African-American community and nationally at a time when the government was imposing racial segregation.

Mrs. Walker is best known as the first African-American woman to found and operate a bank — a huge accomplishment in 1903.

“Placing the statue of Mrs. Walker under a tree hearkens back to the bloody period of history when our heroes swung, in the words of Billie Holiday, like ‘strange fruit,’ ” Mr. Flowers said.

He stamps that point into his petition with this strong statement: “Don’t lynch the legacy of Maggie Walker under a tree!”

Besides avoiding painful symbolism, he said clearing the tree from the plaza also would give artist Antonio Tobias “Toby” Mendez “the free space to fully celebrate the life and work of Mrs. Walker.”

Mr. Flowers and his allies, including retired businessman J. Maurice Hopkins, are throwing down the gauntlet to tree supporters, including Mayor Dwight C. Jones, who see the oak as adding an additional dimension to the plaza project that is projected to cost around $600,000 for the art and other elements.

With Mr. Mendez still mulling a design, both sides in the tree fight are gearing up to express their views to the Richmond Public Art Commission and the city Planning Commission, which will have the final say.

The first community hearing for people to voice their views is set for Tuesday, Jan. 12.

Supporters of the tree were first to push the issue. Appalled that the statue might displace the tree, Jackson Ward resident Mariah Robinson rallied support with an online petition to save the tree she regards as “irreplaceable.”

More than 800 people signed, including Mayor Jones, who announced Dec. 3 that he was joining the “effort to preserve the special oak tree” that he said would add a symbol of strength to the monument.

Mr. Flowers is now seeking to get another perspective heard in one of his first efforts to affect policy in his hometown after years of being involved in national civil rights affairs. Most recently, he was executive director and CEO of the Washington-based Black Leadership Forum, a coalition of 51 black political, civic and economic development groups.

Earlier, Mr. Flowers was based out of Chicago as vice president and national organizer for the Rev. Jesse Jackson’s Rainbow PUSH Coalition. 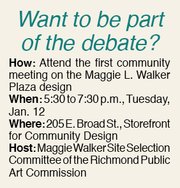 “When I returned to Richmond 18 months ago, I was euphoric when I heard about the plan to place Mrs. Walker’s statue at this intersection,” said Mr. Flowers, who has a consulting firm.

The euphoria quickly faded, he said, after he learned about Ms. Robinson’s petition to maintain the tree. He said that pushed him to take action “to bring together a coalition of conscience, regardless of race and gender, to prevent the legacy of Maggie Walker from being lynched.

“It would be wrong to have an enormous live oak tree literally cast a shadow over this tribute to her life and work,” he said.

If the statue is to succeed, it needs to get the same treatment as the other major statues in Richmond, none of which are stuck under trees, said Mr. Hopkins, a member of the Maggie L. Walker High School Class of 1965.

“We need a 360-degree panoramic view of the statue, and that will not be possible if the tree stays,” he said.

The anti-tree petition is now online at GoPetition.com/petitions/support-Maggie-Walker-without-a-tree.html.