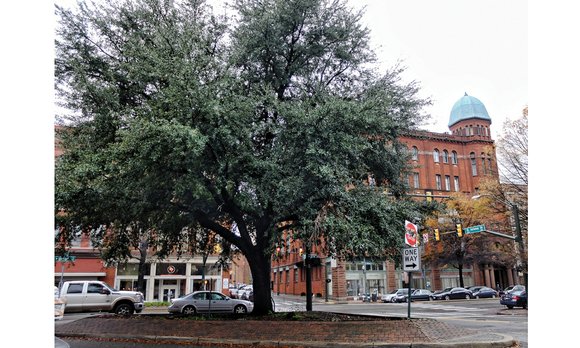 The live oak tree that fills the site of the planned Maggie L. Walker statue and plaza has been the center of debate and controversy. Location: Adams and broad streets in Downtown. Photo by Sandra Sellars

The live oak tree will be axed from the site where the Maggie L. Walker statue will stand in Downtown.

By a 7-0 vote, the team recommended that Mr. Mendez eliminate the tree from designs he is creating for the statue and plaza planned for the gateway to Jackson Ward at Adams and Broad streets — a recommendation he supports.

“The tree does not belong there,” Ms. Driggs said before the vote. She said the tree would obscure the view of the statue, and she cited concerns that had been raised about unwanted connotations.

As the Free Press reported in December, Jackson Ward resident Gary Flowers, who has long been involved with civil rights, led efforts to remove the tree. Joined by retired businessman J. Maurice Hopkins, Mr. Flowers said the tree would conjure up images of lynching if the statue were placed beneath it.

A rarity in Richmond, the live oak tree has been a feature of the intersection since around 1989.

Mr. Flowers did not attend Saturday’s meeting. When reached Wednesday for comment on the committee’s decision, he did not gloat.

“While we will be saddened to see the tree go, the point of the plaza is to honor the legacy of Mrs. Walker,” he said. “This decision means that Mrs. Walker’s image will be seen from 360 degrees so that those who come to the plaza will recognize her importance to the nation.”

Meanwhile, Melvin Jones, an advocate for the statue and a member of the site commit- tee, supported the tree’s removal. He said the tree’s roots would be damaging to the planned plaza.

Mariah Robinson, a Jackson Ward resident who led a petition drive to save the tree, could not be reached for comment.

Mayor Dwight C. Jones, who had signed the petition and promised to save the tree, stated Wednesday through his press office that the site selection team’s “recommendation does not make the decision final as that will be done by the Planning Commission.”

However, Mr. Mendez already was on board

with the committee’s decision, apparently in- fluenced by comments and concerns about the tree that were raised last month during a public meeting on the statue.

Mr. Mendez said after Saturday’s vote that the tree would “not be included” in the preliminary designs for the sculpture and plaza that he and other design team members will present to the public 10:30 a.m. Saturday, Feb. 20, at the Richmond Public Library’s Main Branch in Downtown. The city Public Art Commission, to which the Site Selection Team reports, is hosting the event.

While the city Planning Commission will have the final say on Mr. Mendez’s design, it appears most likely that the commission will see only a treeless version.

The Public Art Commission will send its recommendation, possibly by April, to the Planning Commission. The commission is expected to take its vote after the design goes through the Urban Design Committee and possibly the Commission of Architec- tural Review.