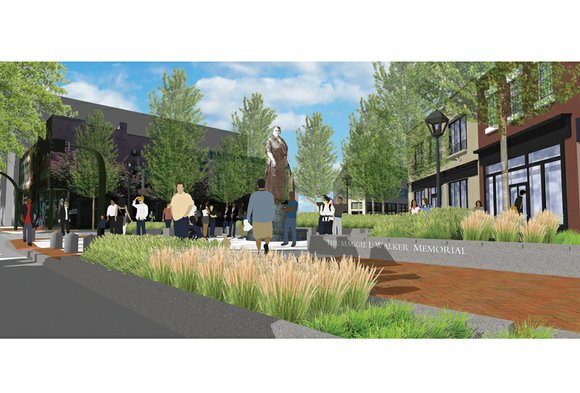 A design team rendering of the statue, plaza and landscaping at Adams and Broad streets in Downtown. Courtesy Richmond Public Art Commission

The Richmond Planning Commission this week ended the debate over the rare live oak tree that now stands at Broad and Adams streets and Brook Road.

The tree is to be eliminated, along with the triangular, dirt-filled base where the tree now stands — making way for the bronze statue of Mrs. Walker, the commission decided Monday in following recommendations from two advisory teams.

In a 7-0 vote Monday, the commission gave a thumbs-up to a conceptual plan by Maryland-based sculptor Antonio T. “Toby” Mendez for a statue of Mrs. Walker that will stand 9- to 10-feet tall and be placed on a 3-foot-4 pedestal in a new plaza at the intersection.

The commission, which has sole discretion on approving statues in public spaces, followed the guidance of the Site Selection Committee of the city’s Public Art Commission and the Urban Design Committee, an advisory arm of the Planning Commission, both of which endorsed removing the tree.

Mr. Mendez, who received a $300,000 commission to produce the bronze statue of Mrs. Walker, initially proposed a 13-foot-tall statue on a 5-foot base, but acquiesced to a smaller figure and pedestal for the late advocate for black empowerment who is best known as the first African-American woman to found and head a bank in the United States.

Mrs. Walker founded the bank as part of her work as the leader of the Independent Order of St. Luke, a fraternal civic, social and mutual insurance organization that she led from the late 1890s until her death in 1934.

The Planning Commission’s decision also clears the way to close a portion of Brook Road, one of Richmond’s earliest streets, between Broad and Adams streets, creating room for the new plaza in which the statue will stand.

However, the commission is still reviewing the design of the proposed plaza that Boston-based VHB, a landscape architecture firm, is creating with Mr. Mendez and a city design team.

A majority of commission members are urging changes in the proposed lighting, memorial wall, plantings and other details in the conceptual design.

The Planning Commission will continue its review of the proposed plaza design at its Monday, May 16, meeting. The commission must approve the conceptual plan before Mr. Mendez and VHB can move forward.

Mayor Dwight C. Jones has been hoping to have the statue in place prior to the end of his term in December.

However, that may not be possible. Mr. Mendez has indicated it would take him 90 to 120 days to create the clay model. After that, he has said it could take six to seven months for the foundry he has chosen to create the metal version and to complete the final detail work on the statue.

Based on that timetable, a new mayor already will be installed before the statue and the plaza would be ready for public viewing.