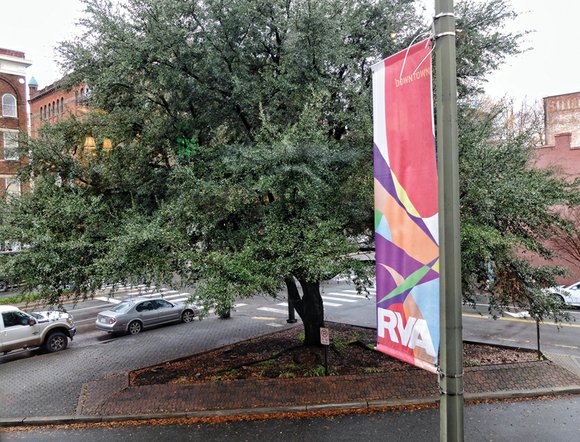 This leafy oak tree growing on a triangle plot Downtown at Broad Street, Adams Street and Brook Road is the subject of a petition drive by people who don’t want it to be cut down for the monument honoring renowned Richmond businesswoman Maggie L. Walker. Photo by Sandra Sellars

Yes, Richmond, that iconic Downtown tree is going to survive.

He disclosed Wednesday that he is committed to saving the green-leafed live oak tree that dominates the triangular site earmarked for a proposed statue of renowned Richmonder Maggie L. Walker, the first African-American woman in the nation to establish and operate a bank.

Mayor Jones has signed an online petition calling on the city to avoid destroying the tree to make way for the statue of Mrs. Walker at the intersection of Brook Road and Broad and Adams streets.

The mayor’s decision is likely to end tension with tree supporters who were promising to fight City Hall, including Jackson Ward resident Mariah Robinson, who started a petition drive to save a tree she considers “irreplaceable.”

On Monday, Dec. 7, the Richmond Planning Commission is to consider recommending closing Brook Road between Adams and Broad to provide space for a proposed pedestrian plaza to be part of the Walker monument.

The mayor is so happy that the statue site is being embraced he sees no need to fight over the tree.

“I consider it a victory that there is such overwhelming support for the chosen location for the Maggie Walker monument,” Mayor Jones wrote in a statement to the Free Press.

“I gladly join in the effort to preserve the special oak tree that is present at the site” and to make sure it is incorporated into the monument site.

Mayor Jones said he has discussed the tree issue with Antonio Tobias “Toby” Mendez, the sculptor who received a $300,000 commission from the city to design the Maggie Walker statue. The conceptual design is still in the preliminary stage.

“I’m confident that (Mr. Tobias) and our public arts coordinator can develop options to achieve the goal of appropriately honoring Maggie Walker while preserving the rare tree,” the mayor stated.

In his view, the inclusion of the live oak will only add to the “specialness of the site, further symbolizing the strength of (Mrs.Walker’s) legacy in the same way oak trees symbolize strength, courage and power,” he wrote.

There are indications that some of the tree’s branches may need pruning to make room for the statue.

Mayor Jones is not surprised about the outpouring of support for the tree. “I know the importance of trees to Richmond.”

He said, though, the concern shows that the city has found “a sensible and prominent location for the Maggie Walker monument,” near the national historic site where she lived and the soon-to-open Black History Museum and Cultural Center of Virginia, both of which are located on Leigh Street in Jackson Ward.

City Council has endorsed the triangle site for a Walker statue twice since 1999.

Mrs. Walker began the St. Luke Penny Savings Bank in 1903 as the leader of a fraternal insurance and burial society known as the Independent Order of St. Luke. The bank later became Consolidated Bank & Trust Co. and is now a division of Premier Bank.

Even amid the growth of segregation, Mrs. Walker promoted entrepreneurial solutions to advance African-American prosperity in Richmond, including launching a department store and a newspaper. A Richmond school has long been named for her.