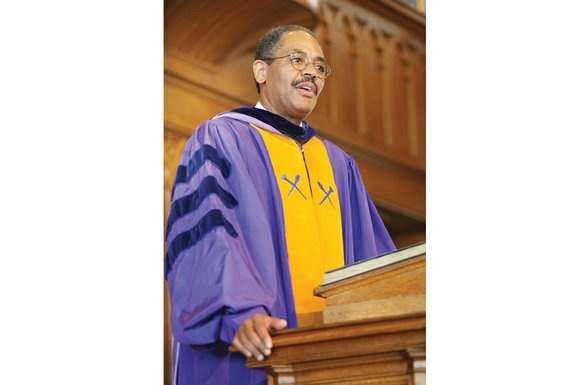 Count Union Presbyterian Seminary President Brian K. Blount is among those calling for an end to anti-Islamic rhetoric and religious intolerance toward the Muslim community.

The Richmond-based faith leader was among the initial signers of a letter by 10 Presbyterian Church-USA seminary presidents opposing “a climate of fear, the stereotyping of racial ethnic persons, the proliferation of guns and gun violence, the demonization of refugees and dangerous isolationism,” according to T. Erskine Clarke, editor and publisher at the “Journal for Preachers” and professor emeritus at Columbia Theological Seminary in Atlanta.

In addition to the 10 seminary presidents, the letter was signed by more than 320 people of faith from around the country.

The letter reads in part:

“We the undersigned are deeply concerned that, in the current political climate, many politicians and many in the media are calling on Christian voters to abandon our commitment to the Gospel of Jesus Christ and to turn from his call to discipleship. We appeal to all of us who are seeking to be faithful followers of Jesus to reject such calls, to reaffirm our Christian commitments and to seek to be agents of change of God’s justice and reconciliation in the world.”

It further states: “Because of fear, we too easily caricature or condemn those who are different from us. Politicians and too many in the media stereotype African-Americans, Asian-Americans, people from Hispanic backgrounds and followers of Islam.

“If we follow their lead, we slander our neighbors and blaspheme against the one God of all peoples. We resist such stereotypes and pledge to work for laws and practices that honor the dignity of all people.”

The letter states that signers “will seek to limit the proliferation of guns” in the United States, pledge to be advocates for laws “that regulate in a just and orderly manner the flow of refugees and immigrants” and work for “systems of security that guard human dignity and protect the vulnerable as well as the strong.”