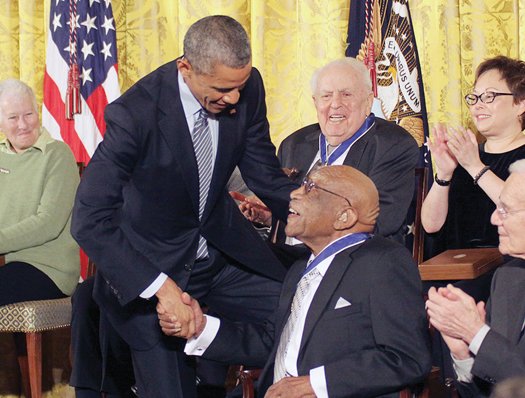 President Obama congratulates Charlie Sifford, the first African-American golfer to play on the PGA tour, after awarding him the Presidential Medal of Freedom in 2014. Photo by Paulette Singleton

Charlie Sifford, who broke the color barrier in golf as the first African-American PGA Tour member, died Tuesday, Feb. 3, 2015, at age 92, the PGA of America announced.

Considered the Jackie Robinson of professional golf, Mr. Sifford endured death threats, racial taunts and other harassment as he paved the way for Tiger Woods and other African- American golfers in becoming the first African- American player in a PGA tournament in 1952 at the Phoenix Open.

His journey and contributions were honored by President Obama, who awarded him with the nation’s highest civilian honor — the Presidential Medal of Freedom — during a White House ceremony Nov. 24.

Recently, Mr. Sifford suffered a stroke. Details of his death and funeral arrangements were not immediately available.

“His love of golf, despite many barriers in his path, strengthened him as he became a beacon for diversity in our game,” Mr. Sprague said. “By his courage, Mr. Sifford inspired others to follow their dreams. Golf was fortunate to have had this exceptional American in our midst.”

He longed to play against the PGA’s best players, only to run into the same barriers that Teddy Rhodes and Bill Spiller faced — the Caucasian-only clause.