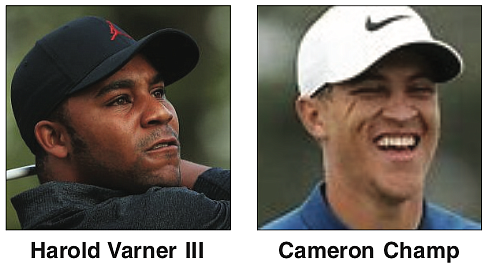 When Tiger Woods burst onto the PGA scene in 1997, many expected a deluge of African-American golfers to follow.

Instead, there’s been a drought.

With Woods always the headliner, African-Americans make up only four of the PGA’s approximately 260 tour regulars. Woods, now 44 and arguably the premier golfer in history, did not play in the Schwab Challenge, an event in Fort Worth, Texas, that drew more than the usual national attention.

The Texas tournament marked the first PGA event since March and the coronavirus pandemic began. There were no spectators. Also, it was among the first pro sporting events of any kind following the tragic death of George Floyd in Minneapolis in May.

With Woods sidelined, that left the stage open to Varner, who challenged for the lead until the final holes, and Champ, who actually surpassed the fading Varner in the end.

In a prepared statement, here’s what Varner had to say about Mr. Floyd’s death and the global fallout that has followed: “Sometimes life is not simple and things don’t make sense. How can we call our country the greatest on Earth when our standards fall to senseless killing? “That’s a tough and important question. But I still say we are not as fractured as it seems.”

The PGA honored Mr. Floyd with a moment of silence each of the four days of the tournament. At precisely 8:46 each morning, following three loud bursts from a horn, all action stopped both on the course and in practice areas. The 8:46 represented the agonizing length of time during which Mr. Floyd was brutalized and suffocated to death under the knee of a Minneapolis policeman who is now charged with his murder.

Known as “HV3,” Varner is a 29-year-old native of Gastonia, N.C., who played at East Carolina University before turning pro in 2012. His lone PGA victory thus far is the 2016 Australian Open.

Varner was making all the early headlines in Fort Worth. He was tied for the lead with a 63 after the first 18 holes and actually held first place, by a stroke, after two rounds at 129.

He was still only three strokes from the top after three rounds before faltering on the final day. Still, his 271 final total was worth $95,625.

Taking more of a tortoise-like approach during the Fort Worth tournament was Champ.

A former Texas A&M University standout, Champ is a two-time PGA winner, taking top honors at the 2018 Sanderson Farms Open in Jackson, Miss., and the 2019 Safeway Open in Napa, Calif.

Champ’s father is African-American and his mother is Caucasian. His father, Jeff Champ, played the 1988 and 1989 baseball seasons as a catcher in the Baltimore Orioles’ affiliate chain.

The only other African-American golfer currently on the PGA circuit is 33-year-old Wyatt Worthington II. An Ohio native, Worthington played at Methodist University in Fayetteville, N.C., before earning a PGA card in 2011.

Until 1961, the PGA’s “whites-only” clause eliminated African-Americans from any opportunity.

CharlieSifford,famousforhisever-presentcigar, was the first African-American to win a PGA card in 1961, after many years on minor league circuits, including the National Negro League.

The late Mr. Sifford, now a member of the PGA Hall of Fame, went on to win the Greater Hartford Open in 1967 and the Los Angeles Open in 1969.

Lee Elder, James Dent, George Johnson and Charlie Owens were other African-Americans winning PGA tour events prior to the 1990s.

So why the absence of African-Americans now?

Some point to the sport’s ever growing cost. Nowadays, it would be hard climbing the ladder without a private swing coach, custom-made clubs and full access to courses and driving ranges.

Then there’s the disappearance of caddies in an activity that has become increasingly mobilized with carts. Many of the “old timers” were introduced to the game carrying bags.

All that leads to a lack of role models on tour. Outside of Woods, few people can name an African-American golfer.

With basketball and football easily the most popular sports among young African-Americans, golf isn’t an activity with a lot of street cred.

But for several days in Fort Worth, in the aftermath of Mr. Floyd’s senseless death, Harold Varner III, a rare African-American man playing a white man’s sport, caught everyone’s attention for all the right reasons.