Delegate Morrissey, left, distantly checks his work while, beside him, two new delegates, Joseph E. Preston of Petersburg and Kathleen Murphy of Loudoun County, enjoy their first day at the new session in the House of Delegates. Photo by Sandra Sellars 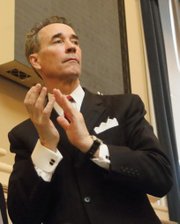 The embattled legislator received rock star treatment Wednesday from a gaggle of TV, radio and print reporters who followed his every move and hung on his words, but mostly got the icy shoulder from fellow lawmakers.

Fresh from winning re-election in a special election the night before, Delegate Morrissey was virtually ignored by the men and women he serves with after being sworn in at his legisla-

tive office about 11:25 a.m. and walking into the Capitol to take his seat in the House of Delegates for the opening of the new session at noon.

Only Richmond Delegate Delores L. McQuinn walked over to speak with him during a recess.

The 57-year-old lawyer appeared to have braced himself for a different reception.

Responding to a question about how he would deal with any effort by the legislature to expel him, he said he expects “certain people to take certain actions, and I will respond then.”

However, instead of being greeted with verbal brickbats, Delegate Morrissey sat largely unnoticed in a corner seat next to the Speaker of the House’s dais, his only unexpected recognition coming from House Speaker William J. Howell, a Republican, who welcomed him and four other newcomers. Three of the new lawmakers were seated at desks in the same front row as Delegate Morrissey.

In his remarks to the members, Speaker Howell made no mention of the sex scandal surrounding Delegate Morrissey, or the fact that he is now spending his nights in the Henrico County Jail East stemming from his conviction from having an illicit relationship in 2013 with his then 17-year-old receptionist.

Instead, the speaker called on House members to live up to the expectations of citizens to do their lawmaking with “honor, integrity and civility.”

Asked after the session about plans for sanctions against Delegate Morrissey, whom the speaker believes has disgraced the office, Speaker Howell said: “Stay tuned.”

Delegate David Toscano, leader of the 32 Democrats in the House, said, “We’re considering all of our options” with regard to the possibility that Delegate Morrissey could be censured, removed from committees or even expelled.

“It’s a mess and a distraction,” said a Richmond area delegate who did not want to be identified. “What do we do about him?”

Delegate Morrissey’s return, complete with an ankle monitor so authorities can track him, came after he beat two challengers to reclaim his seat.

Even a pre-election police raid on his law office could not halt his supporters from turning out on a rainy, chilly day and carrying him to a 597-vote victory over his closest competitor in the special election in the 74th House District. The district, which has a majority-black population, includes part of Richmond and Henrico County and all of Charles City County.

Delegate Morrissey has represented the district as a Democrat since 2007. This time, however, he ran as an independent and, because of his conviction, was largely limited to campaigning by telephone from his law office.

Nonetheless, he swept all three localities, with voters rebuffing the Democratic Party leadership that had backed a little-known former state labor leader and Charles City farmer, Kevin J. Sul- livan, as their candidate.

Delegate Morrissey triggered the special election by resigning his office after his conviction on a misdemeanor of contribut- ing to the delinquency, a conviction that did not bar him from serving in the legislature.

He began serving a 90-day sentence last month after enter- ing an Alford plea denying any wrongdoing but acknowledging the prosecution had enough evidence to convict him. He still maintains his innocence, as does the teenager who insists there was no sexual relationship with him at the time.

His resignation from the House became effective on the same day he won the special election. He learned about his win from a TV news reporter seeking an interview after he arrived back at the Henrico County Jail-East in New Kent County around 8:30 p.m. Tuesday.

In a race that drew 6,720 voters — or about 13 percent of the 53,000 registered in the district — Delegate Morrissey finished with 2,840 votes, or 42 percent of those cast. He beat Mr. Sullivan, who received 2,243 votes, or 33 percent. The third candidate, Republican Matt D. Walton, a teacher, received 1,622 votes, or 24 percent, a surprisingly strong showing in the heavily Democratic district.

“The voters have spoken,” Delegate Morrissey said at his legislative office in Capitol Square. “Who would have imagined” that someone who had so many aligned against him would come out on top, he said.

Delegate Morrissey said he hopes he will be allowed to serve out his current term that ends in December. He would have to run again in November to stay in the legislature, but he declined to say whether he would do so. “I have many interests, and serving in the General Assembly is just one of them,” he noted.

Some of those who opposed his re-election now think that the outcome should bring to a close talk of expulsion.

“The will of the people is sovereign,” said Henrico Sen. A. Donald McEachin, chair of the Senate Democratic Caucus. “The voters are our bosses. They made their decision. Let me make it clear: This is a matter for the House. However, given the result, I think he should be allowed to fully participate.”

Delegate Morrissey has been punished to an extent. While he is back in office, he lost the seven years of seniority he had built up on committees.

His front-bench seat reflects that he is once again considered a freshman.

He also has lost his entrée into the House Democratic Caucus. He did not seek to return and caucus members, who strenuously had urged him to resign, did not invite him back.

“Based on what I have heard, I do not believe he would be

The last time the House expelled a member was in 1876.

Delegate Morrissey remains unfazed. He said after the ses- sion that he remains confident and believes “things will turn out exactly as they are supposed to be.”