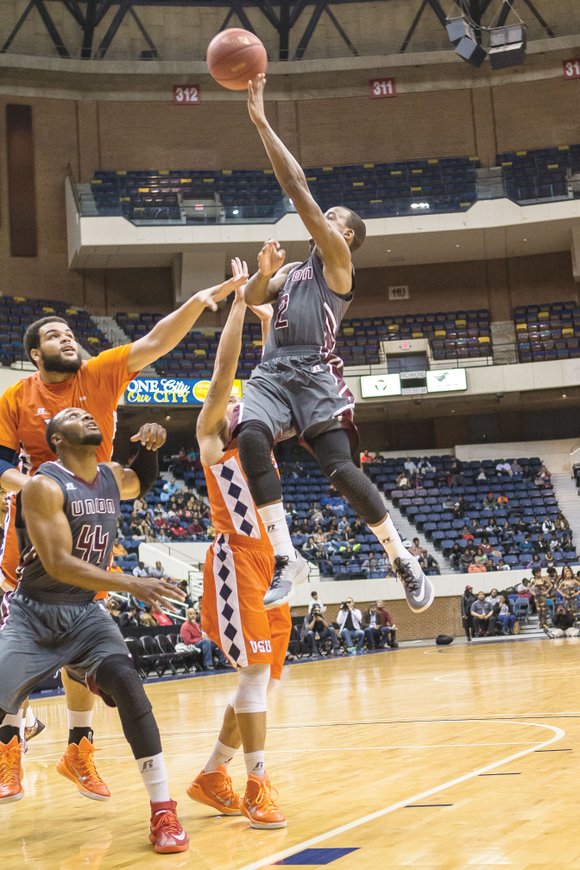 Avery Jirmnson unleashes a shot for Virginia Union University, but he and the rest of the Panthers could not halt Virginia State University from trouncing them by 19 points in this annual contest and keeping them winless in CIAA conference play. Photo by James Haskins

It is fitting Lamar Kearse wears blue and orange jersey No. 3 for the Virginia State University’s Trojans.

After all, he’s the CIAA’s top 3-point marksman.

The 6-feet-tall senior from Syracuse connected on four of six 3-pointers and led all scorers with 16 as VSU routed Virginia Union University 64-45 in the 19th Freedom Classic at the Richmond Coliseum on Sunday.

It marked the third straight year VSU has won the Freedom Classic after losing 15 of the first 16 classics.

Entering this week, Kearse was 36 for 67 beyond the 20-foot, 9-inch arc for a glistening 54 percent. That’s the equivalent of 79 percent on two-pointers.

With its 10th straight loss, Virginia Union slumps to 4-13 overall and 0-7 in the CIAA.

Kearse, a transfer student, was already on campus when Lonnie Blow arrived as the coaching successor to Darryl Jacobs in the spring of 2013. He sat out the 2012-13 season after two seasons as a regular at Division I New Jersey Institute of Technology in Newark.

His game has taken off as a senior.

He has emerged as not only an All-CIAA candidate but as a CIAA Player of the Year candidate as well.

His accuracy has surpassed expectations.

Kearse hit a mediocre 29 percent from the 3-point range as a junior while averaging 11 points.

“Before the season, I’d shoot hundreds of balls a day. I mean hundreds,” he said. “In fact, I shot so much that I developed tendonitis in my right shoulder. Sometimes it hurts. Sometimes it doesn’t.”

Victories are always a salve for sore shoulders — or sore anything.

Kearse hails from a winning back- ground. He was part of three straight New York State Class A championships at Jamesville-DeWitt High in Syracuse.

He’s hitting 51 percent overall from the floor and has taken just 174 shots. By contrast, the CIAA’s leading scorer, Knox, had launched 264 shots (for 41 percent) starting this week.

While Kearse was a top perimeter player on the floor against VUU, Trojans senior Tyrece Little was the most notable post performer.

The 6-foot-8 Little had 10 points, 10 rebounds and was an intimidating factor defensively. He is averaging close to double digits (10.1 points, 8 rebounds) for the season.

Little made the play of the night at the Richmond Coliseum.

In late going with VSU in firm control, Little woke up the crowd with an oh-my-gosh dunk in which it appeared his right hand rose halfway up the backboard.

Coincidentally, Catawba College is the alma mater of former VUU coach Dave Robbins, who was in attendance at the Freedom Classic.