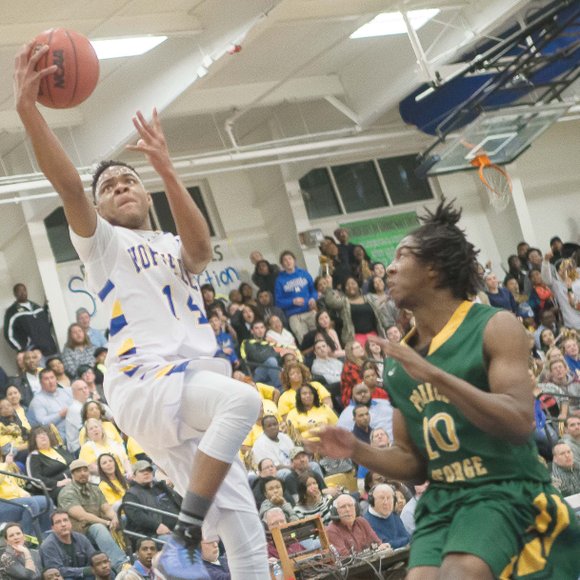 Hopewell is home of blue collars and Blue Devils.

The working class city is noted for its smokestacks and its basketball, in either order you prefer.

Traveling through Hopewell, you can’t help but notice the skyline of chimneys of Honeywell, Ashland and Evonik Goldschmidt chemical plants and Rock- Tenn paper mill, factories providing much of local employment.

Another aspect of life in Hopewell is the decades- long and ongoing basketball success of the Hopewell High School Blue Devils.

In fact, Hopewell High has been so good so long, it’s now dubbed “Hoopwell.”

The Blue Devils, under the direction of second-year coach Robbie St. John, started 16-0 and are threatening to seize Conference 26 control away from Richmond juggernauts John Marshall and George Wythe High schools.

More the merrier: There is no superhero among the present cast; it’s a bunch of Robins with no particular Batman.

St. John isn’t afraid to go to a bench that supplies about 15 points per outing.

The Blue Devils are playing one man down. The team lost its returning point guard, Isaiah Fernandez, to a season-ending injury.

Littlepage is a member of the State Athletic Hall of Fame.

A Liberty University graduate, St. John has placed more emphasis on offseason strength and conditioning, while paying homage to the history book.

St. John has asked his players to study the multitude of championship banners on the gym walls and try and imagine where the next banner — representing their work — will be hung.

It seems only right the Blue Devils play in a facility called Bill Littlepage Gymnasium.

Hopewell versus Petersburg, another basketball juggernaut, is rated among the fiercest rivalries in Virginia.