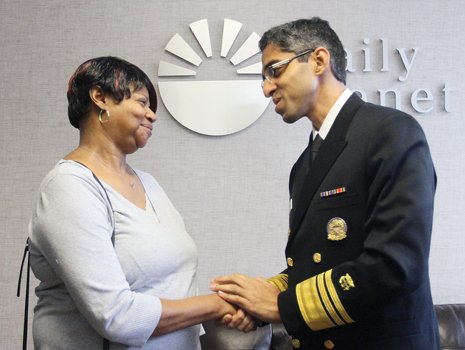 Dr. Vivek Murthy, the nation’s surgeon general, talks with Joyce Pollard of Chesterfield at The Daily Planet in Richmond, where staff helped her sign up for health insurance under the Affordable Care Act.

The surgeon general of the United States learned Tuesday that affording health care is as much of a struggle as maintaining good health for some Richmond residents.

Dr. Vivek Murthy, who at 37 is one of the youngest surgeon generals in the nation’s history and the first of Indian- American descent, met with community leaders, health care workers and residents in Richmond at The Daily Planet, a health center on West Grace Street that serves the homeless and low-income people and families.

Chesterfield resident Joyce Pollard shared with Dr. Murthy that she lived without health insurance for about a decade, despite being diagnosed with high blood pressure, diabetes and high cholesterol.

Ms. Pollard, who recently signed up for insurance under the Affordable Care Act, has a full-time job taking care of her 32-year-old autistic son.

At one point, she told the surgeon general, she was taking care of multiple family members, but she could not go to a doctor for her own health.

“I got tired of people sending me bills that I couldn’t afford to pay,” Ms. Pollard said. Through the help of staff members at The Daily Planet in signing up for health insurance under the ACA, Ms. Pollard now receives a tax credit that significantly reduces the price of her monthly insurance payment.

Dr. Murthy said African-Americans and other ethnic minorities experience illness and mortality at a higher rate than those of the general population.

In Richmond, with a population that is 50 percent African-American, it’s up to community leaders, including pastors of area churches, to engage the community in health initiatives, Dr. Murthy said.

“When, for example, you have African- American pastors and religious leaders reaching out to the African-American com- munity where they already have a bond of trust, that means a lot,” he said.

“This is where we’re losing the most in terms of lives and dollars in our country,” Dr. Murthy said.

Richmond is among the most obese U.S. communities, with a 28.8 percent obesity rate, according a Gallup report that analyzed health data from 2012 to 2013.

Dr. Murthy said he is encouraged to see various Richmond community initiatives, such as an urban gardening initiative, which provides fruits and vegetables to encourage healthy eating, and the Richmond Family & Fatherhood Initiative, which aims to increase the number of two-parent homes and to foster healthy families.

“I’m very encouraged by the passion that people have here in Richmond for improving health in the community. They’re doing a lot with very little resources, which is a challenge of our time,” Dr. Murthy said.