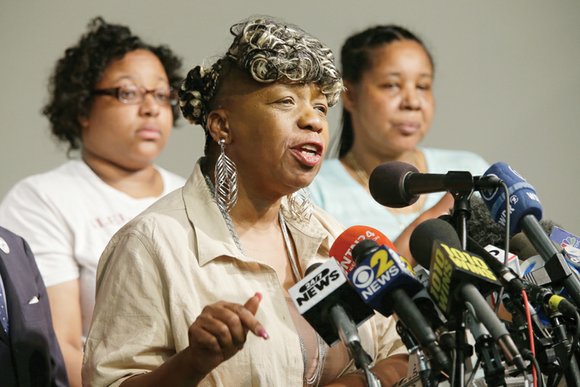 Eric Garner’s mother, Gwen Carr, center, is joined by his daughter, Emerald Snipes, left, and widow, Esaw Garner, at a news conference Tuesday in New York. The family spoke after reaching a $5.9 million settlement with the city in the wrongful death case of Mr. Garner, who died after being placed in a chokehold by a white police officer. Photo by Associated Press Mary Altaffer

The family of Eric Garner, who died after a white police officer put him in a chokehold a year ago, renewed calls this week to criminally charge the police officer, a day after the family reached a $5.9 million settlement with New York City.

A grand jury in December declined to indict the officer, Daniel Pantaleo, who placed Mr. Garner, 43, in the chokehold, a maneuver banned by the New York City Police Department. A video that a bystander took of the incident sparked protests across the country over police treatment of African-Americans.

They called for charges in connection with his July 17, 2014, death.

“We are losing our family members and they are not losing anything,” said Mrs. Garner, who more than once broke down in tears. “Now I am alone to deal with this my whole life.”

Mr. Garner, a father of six, was accused of illegally selling cigarettes on a sidewalk when Officer Pantaleo put him in the chokehold from behind and brought him down with the help of other officers. Mr. Garner complained repeatedly that he could not breathe.

His last words, “I can’t breathe,” have been used in many of the Black Lives Matter rallies across the country protesting the number of deaths of black men at the hands of white police officers.

The settlement is among a series of large settlements during the past two years by New York Mayor Bill de Blasio and City Comptroller Scott Stringer to resolve cases of alleged police brutality.

A separate settlement was reached with the hospital that employed emergency medical technicians who responded to the scene and did not aid Mr. Garner. Terms of that agreement have not been released.

Mr. Garner’s family had filed a claim in October seeking $75 million in damages.

“The settlement that we got isn’t a victory,” said Mr. Garner’s mother, Mrs. Carr. “The victory will come when we get justice. Where is the justice?”

A rally is planned for Saturday outside a Brooklyn federal courthouse.