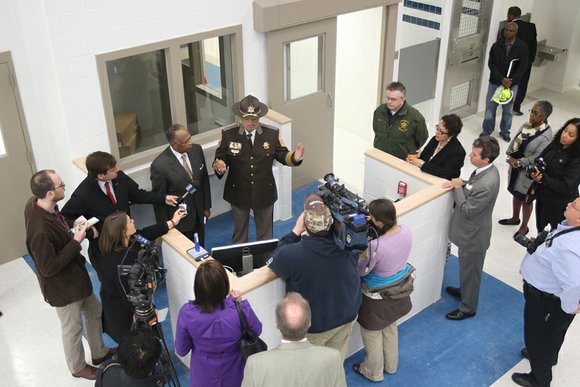 The deaths of three inmates with health problems are once again raising questions about the quality of medical services at Richmond’s jail.

All three men suffered health emergencies last week and succumbed, according to the office of veteran Sheriff C.T. Woody Jr.

The office identified the inmates as Shawn Samuel Jr., 22, Zachary E. Tuggle, 29, and Javon A. Morris, 38 — the first inmates to die in the year-old Richmond City Justice Center in Shockoe Valley.

Mr. Morris, who had a heart condition, was under medical care in the jail while the other two died in their cells from as yet unexplained causes. However, it is now known that Mr. Samuel was diabetic and Mr. Tuggle had epilepsy.

Questions hover about whether they were receiving appropriate treatment and medication.

In a statement released Tuesday, Sheriff Woody characterized their deaths as a “private, tragic situation for the families involved, and we mourn with them.”

Richmond has long had more inmate deaths from medical conditions than any other jail in the area, in part because those arrested often come in with untreated conditions.

Since Sheriff Woody took charge of jail operations in 2006, an average of six inmates have died each year of medical conditions among the thousands of people housed annually at the jail. That’s about two to six times the average for other jails in nearby localities.

The sheriff has defended the standard medical care provided at the jail, calling it better than that received by many of the inmates before incarceration.

However, the death rate at the jail was expected to fall sharply after the new Justice Center opened with a state-of-the art medical tier that was developed to upgrade care and reduce the flow of inmates needing hospital treatment.

On the city’s website, Sheriff Woody boasts about the medical services that can be provided in the new jail that replaced a crumbling, outdated and overcrowded facility. He notes that the new medical tier has 18 specialty beds and is “designed to provide maximum, onsite care” for the inmates he calls “residents.”

Services offered at the Justice Center include X-rays and dialysis. There also is a hyperbaric oxygen chamber to, among other things, treat infections from diabetes and other diseases. The suite also can offer female inmates gynecological and obstetrical services and there’s space to provide dental services.

On the website, Sheriff Woody also celebrates the hiring of NaphCare, a Birmingham, Ala., company that promotes itself as providing top-notch medical services for client correctional facilities. Richmond awarded the company a three-year, $6.2 million contract last October to provide jail medical services. Portsmouth and Virginia Beach also have hired the company. NaphCare replaced the former provider, Nashville, Tenn.-based Correct Care Solutions that was hired in 2011.

On its website, NaphCare cites its modern practices, including providing a system that creates electronic health records for inmates in the jails its serves and the proactive medical service it provides. That includes a program in which all arriving inmates receive a health assessment and mental health and TB screening before entering the general population. Treatment plans for each inmate also are developed and started immediately to prevent the spread of disease, the company states.

“Our staff is trained to always be on the lookout for important clinical issues and to use such opportunities for brief interventions, such as patient-focused education,” the company also states on its website. “This interaction creates opportunities for scheduling physician visits and mental health evaluations. Reactive care can cause potentially dangerous situations.”

But the death of the three inmates suggests shortcomings in the company’s actual practices at Richmond’s jail, which just recently received full accreditation from the Virginia Department of Corrections for complying with all state standards.

Mr. Morris was arrested on a misdemeanor assault charge stemming from an incident in March and admitted to the jail July 14, according to court records. He was awaiting a hearing. It’s not clear why he was not released on bond.

While Sheriff Woody released a statement that Mr. Morris died “a natural death,” the state Medical Examiner’s Office went further, attributing his death to heart disease. The official cause of death was stated to be coronary atherosclerosis, or arterial blockage, a serious condition that might have been relieved if he had been transported to the hospital far sooner. Whether the NaphCare staff on site properly diagnosed and dealt with Mr. Morris’ condition is unknown.

The Medical Examiner’s Office lists as “pending” the cause of death of Mr. Samuel and Mr. Tuggle.

The family of Mr. Tuggle fears he died because he was not receiving medication to control his seizures. Mr. Tuggle’s attorney, James A. Bullard Jr., a former prosecutor now in private legal practice, publicly raised the allegation Tuesday that failure to provide medication led to an uncontrolled seizure that killed him.

Mr. Tuggle had been in jail since Oct. 31 while awaiting trial on felony charges of illegal possession and concealment of a gun, along with charges of possession of marijuana and larceny.

The Sheriff’s Office has not commented on the allegation. The office stated that at 12:24 p.m. July 13, Mr. Tuggle “was involved in a medical emergency in his cell. The medical department responded” along with the city’s Emergency Medical Services personnel. At 1:11 p.m., he was pronounced dead, the sheriff’s office noted.

The Sheriff’s Office is jointly investigating his death with Richmond Police and is keeping mum while awaiting the medical examiner’s report.

Mr. Samuel, meanwhile, had been at the jail since Sept. 29, the Sheriff’s Office stated. He was serving two years and eight months of a 12-year sentence, 10 years of which were suspended, for conviction on six charges of burglary, larceny and escape.

In Mr. Samuel’s case, the Sheriff’s Office also has declined to comment on whether he succumbed because the jail’s medical staff did not allow him to follow the strict regimen of taking insulin that his diabetic condition required.

Mr. Samuel was found unresponsive in his cell at 3:15 a.m. July 15 during an inmate bed check. The Sheriff’s Office stated that attempts to revive Mr. Samuel were unsuccessful and he was pronounced dead at 3:53 a.m.

A joint sheriff-police investigation also is underway in his death.