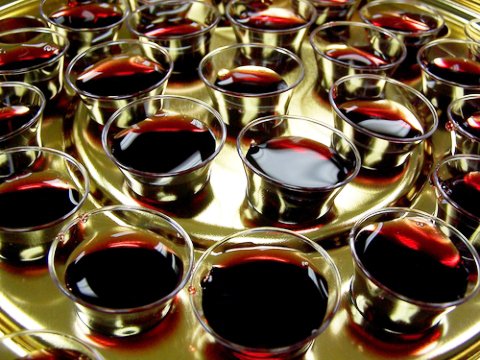 Can prisons ban inmates from drinking communion wine at religious services behind bars?

The 4th U.S. Circuit Court of Appeals says no.

The ruling July 9 reverses a lower court’s decision that threw out an inmate’s 2012 lawsuit challenging the ban, along with other prison policies, on grounds of religious freedom. The appeals court ruling opens the door for a trial in the case.

A three-judge panel found that the complete wine ban violates a federal law requiring prisons to accommodate inmates’ religious beliefs unless the government can show that the only way to ensure security is to disregard specific beliefs.

A ban on communion wine for inmates does not meet that test, Judge Roger L. Gregory wrote for a unanimous panel that included Judge Henry F. Floyd and the court’s chief judge, William B. Traxler Jr.

An inmate who calls himself Jesus Emmanuel Jehovah brought the challenge against Harold Clarke, director of the state Department of Corrections, and other state prison officials. Mr. Jehovah is imprisoned at the Sussex I Prison in Southside Virginia.

In a summary, Judge Gregory wrote, “Mr. Jehovah claimed that the prison system was preventing him from taking communion in the manner required by his religious beliefs. His religion mandates that he take communion by drinking red wine and consuming bread dipped in honey, olive oil, sugar, cinnamon and water.”

In Christianity, the bread and wine of communion represent the body and blood of Christ as symbolized by Jesus during the Last Supper just hours before the crucifixion.

In the 18-page opinion, Judge Gregory noted that Virginia prisons allow ministers to drink wine at communion services, meaning “wine is already permitted on the premises.”

Judge Gregory also noted that state prison policies have swung from an outright ban on inmates drinking communion wine to allowing inmates to dip bread in communion wine and now back to a total ban.

In reinstating the lawsuit, Judge Gregory wrote that Mr. Jehovah had proposed reasonable, less restrictive alternatives, including barring inmates with histories of alcoholism from partaking, applying the same security measures in use for medication to wine or limiting any ruling to solely allowing Mr. Jehovah to drink communion wine.

If the case went to trial, “a reasonable jury could find (that there are alternatives) so ‘obvious’ and ‘easy’ as to suggest the ban is ‘an exaggerated response,’” Judge Gregory stated in quoting from a previous case involving inmate religious freedom.

The decision also reinstated two other religious freedom issues raised in the lawsuit by Mr. Jehovah, who previously has used the names Robert Gabriel Love and Gabriel Alexander.

Those issues include the Sussex prison barring Mr. Jehovah from working in prison jobs because he objected to working on Saturdays and Sundays, his Sabbath days, and housing him with nonbelievers who harassed him about his religious beliefs.

Judge Gregory found that Mr. Jehovah had met the threshold for showing that his religious beliefs were substantially burdened, and that he is entitled to a full hearing for relief in the lower federal district court in Alexandria.