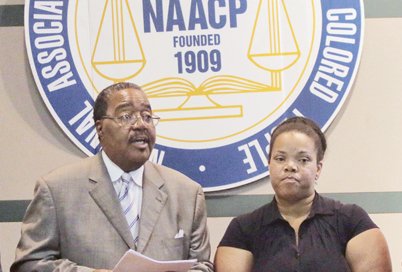 There’s a new twist in the case of the Richmond area woman who advocates for children with learning disabilities.

Kandise Lucas now wants to fight her conviction of trespassing at a Chesterfield County school where she went to help a family navigate the process of gaining an individualized learning plan for their special needs child.

She is preparing to ask the Chesterfield General District Court to allow her to withdraw the Alford plea she entered July 7 so she can plead not guilty and contest the charge, according to her new attorney, Joseph D. Morrissey.

“I don’t believe she has done anything wrong,” he said.

Mr. Morrissey, now a candidate for the state Senate, said he agreed to represent Ms. Lucas on a pro bono basis at the request of Jack Gravely, interim executive director of the Virginia NAACP.

Ms. Lucas drew a lot of attention following her arrest for trespassing April 29 at Meadowbrook High School. She had gone to the school at the request of a parent to serve as an advocate for a student.

Mr. Morrissey said that under federal and state policies, a parent can request the advocate of their choice, and, as a result, the arrest might not have been warranted. Ms. Lucas garnered the backing of the state NAACP in her fight to beat the charge, so the entry of an Alford plea shocked her supporters. Under the plea, she maintained her innocence, but agreed there was enough evidence to convict her.

Her case was taken under advisement by the judge, with a promise that it would be dismissed if she did not face further legal problems in the next 12 months.

Mr. Morrissey said Ms. Lucas now is in legal limbo because there is no final judgment in her case. He said he is hoping the court would allow her to withdraw the plea.

He said that would allow the case to be heard, and for her to appeal to Circuit Court if she were to be convicted. — JEREMY M. LAZARUS