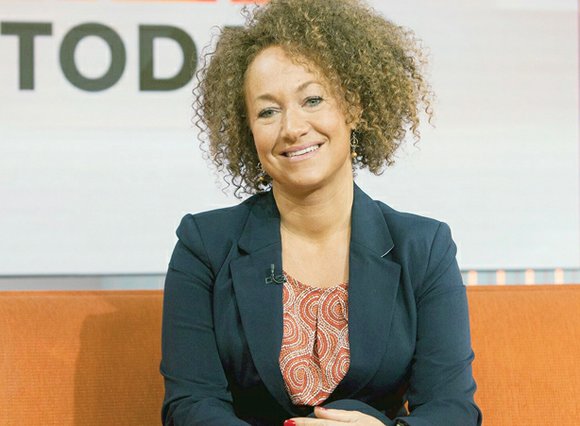 Rachel Dolezal has become the talk of the nation.

The once obscure NAACP leader in Spokane, Wash., jumped into the spotlight in recent days when her estranged family publicly called into question her claim to be a black woman in newspaper and TV interviews.

The tale of a white woman who insists on being regarded as a black woman touched a nerve and quickly went viral on social media — sparking widespread discussions about racial identity.

Race is a touchy subject, but in this country, it’s like religion — in general, you are who you say you are. There are no membership cards to be checked.

Clearly, the fascination with the story was, in part, triggered by the reality that Ms. Dolezal, despite her statements to the contrary, was born to two white parents, has light skin, blue eyes and hair that has gone from blonde to brown.

The intense scrutiny has had consequences for Ms. Dolezal, dimming her star as a civil rights advocate in Spokane where she has lived for about two years after a stint as a human rights advocate in the Idaho community of Coeur d’Alene.

On Monday, she stepped down as president of the Spokane Branch NAACP in seeking to turn down the spotlight, all the while still defending her self-identification as a black person.

“There are questions and assumptions swirling in national and global news about my family, my race, my credibility,” she told an interviewer before she resigned.

An artist and a part-time instructor in Africana studies at Eastern Washington University until last Friday when her contract ended, Ms. Dolezal also is facing questions from the City of Spokane that could end her other public role as volunteer chairwoman of a police oversight commission.

The multiracial NAACP, the nation’s oldest and largest civil rights group, has largely been supportive of Ms. Dolezal, who began serving as president of the Spokane branch in January.

The NAACP “is not concerned with the racial identity of our leadership,” said Cornell William Brooks, national president of the NAACP, whose founders 109 years ago included white as well as black activists.

Echoing comments from the NAACP in Spokane and in chapters elsewhere, Mr. Brooks said, “We encourage Americans of all stripes to become members and serve as leaders in our organization.”

The concern about Ms. Dolezal “is not about race, it’s about integrity,” said the Rev. Al Sharpton, the political commentator and founder and leader of the predominantly black National Action Network. “There are white people in all of our organizations and there are whites in the civil rights movement.”

Similar views were heard in Richmond where people seemed more focused on Ms. Dolezal identifying an unrelated black man as her father, misrepresenting her race on government forms and referring to her curly, darkened hair as “natural” despite growing up with straight blonde hair. She also has told stories about receiving threatening and abusive letters and of being assaulted because of her race.

Those items drew the most attention from callers, said Jack W. Gravely, a talk show host on WLEE News Talk 990 radio in Richmond and interim executive director of the Virginia State NAACP.

“Color made no difference. It was about her integrity and character,” Mr. Gravely said of the comments he received, adding that even if she said she was white, the Spokane NAACP likely would have elected her as branch president because of her civil rights work.

“I identify as black,” Ms. Dolezal said Tuesday during an appearance on the “Today Show.”

As a child, she said she “drew self-portraits with the brown crayon instead of the peach crayon.”

She said her identification has deepened as the mother of two black sons. Her children have shown her “what it means to experience and live black,” she said.

She also grew up with four black children her parents adopted — three American and one Haitian.

Her decision to identify as a black person appears to have flowered after she earned a master’s degree in fine arts at Howard University in 2002. Before graduating, she sued the university for failing to put her on equal footing with her black peers in terms of gaining a scholarship and teaching assistant post because she was white. The suit was dismissed in 2004.

Jelani Cobb, a commentator for New Yorker magazine, noted that Ms. Dolezal’s experience at Howard showed her how easy it is to don a black identity.

Also a Howard graduate, Mr. Cobb noted that, at the school, one learns quickly that “the constellation of black identities and appearances is so staggeringly vast as to ridicule the idea that blackness could be, or ever has been any one thing.”

Writing on the Dolezal case, he recalled learning at Howard that people who are black come in all shades, including mostly white, “a direct product of the bloodlines that attest to institutionalized rape during and after slavery.” That means “nearly all who identify as African-Americans have some white ancestry,” he wrote.

Mr. Cobb is not alone in feeling that Ms. Dolezal went too far.

“She may be connected to black communities and feel an affinity with the styles and cultural innovations of black people,” Alicia Walters, founder and director of Echoing Ida, an Oakland, Calif., leadership program for black women. “But the black identity cannot be put on like a pair of shoes.”

Ms. Dolezal “showed the world that a person can be black without the burden of having lived through it, rendering invisible the experiences that forge a black woman’s identity,” Ms. Walters said.

Ms. Dolezal has her defenders.

“There’s an alternative response to the Rachel Dolezal story, one where we applaud a fellow human being for abandoning unearned racial privilege,” tweeted Thuli Madonsela, who serves as public protector, or ombudsman, for people in South Africa.

Closer to home, James Wilburn, a former Spokane NAACP president, said, “White, black, it didn’t matter. She had a lot of passion for human rights, and that’s what mattered.”