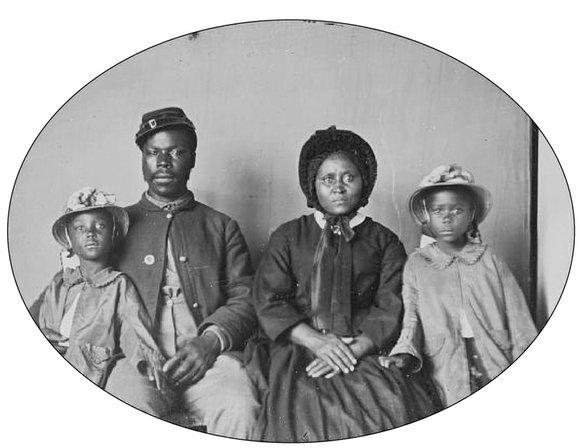 An unidentified Union soldier poses with his wife and two daughters in this photograph taken circa 1863-1865.

A four-day commemoration in Richmond organized by a coalition of organizations called The Future of Richmond’s Past will mark the 150th anniversary of the liberation of Richmond, ending its role as the epicenter of the slave trade.

A major highlight will be the “Blue Coats Parade,” starting 9:30 a.m. Saturday, April 4. It is a commemorative procession along East Main and Bank streets from Rockett’s Landing to the State Capitol to follow the route of the United States

Gov. Terry McAuliffe will make remarks and will be joined by the choir from Virginia Union University and others in a ceremony from 11 to 11:30 a.m. on the Capitol Portico.

Other venues across the state also will commemorate the sesquicentennial of the surrender of the Southern army under Gen. Robert E. Lee on April 9, 1865, at Appomattox Courthouse.

The events April 1-4 in Richmond will include programs, tours of the city’s historic areas and an evening projection of images on modern Downtown buildings representing fires that burned as the city was evacuated.

The full schedule will be available at www.OnToRichmond.com and www.RichmondsJourney.org. Most programs and tours begin on the grounds of the State Capitol.

“Christian Perspectives on Faith, Then and Now”: 7 to 8:30 p.m., 2nd Presbyterian Church, 5 N. 5th St.: Exploring the meaning of the end of enslavement and the Civil War in Richmond through the lens of the faith community.

• “So Foul and Fair a Day – The Fall of Richmond”: 3 to 5 p.m., American Civil War Museum/White House of the Confederacy, 1201 E. Clay St.: Explore the final days of the Confederate capital and the first days of the liberating Union troops through a walking tour.

• The Burning of Richmond: 6:30 to 8:30 p.m., tour starts at Bank and Governor streets: An evening illumination of Richmond’s Downtown cityscape will represent the evacuation fires with projected images on modern buildings. Guided lantern tours and re-enactors will give tourists the experience of the horrors of the fires.