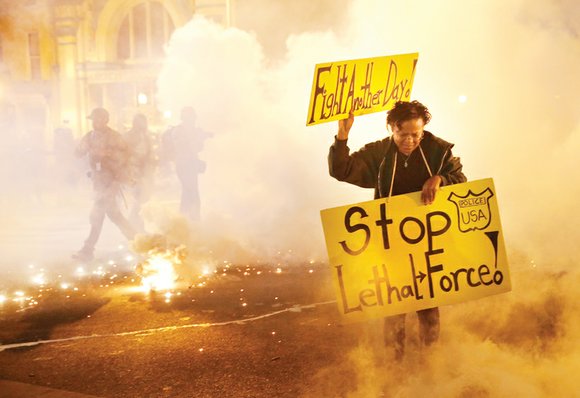 Tear gas clouds surround a woman demonstrating Tuesday night in Baltimore over the death of Freddie Gray, who died of severe injuries suffered while in police custody. Police fired the tear gas as part of efforts to prevent further violence. Rioting Monday night resulted in cars and buildings torched and businesses looted. Photo by Associated Press

While Ms. Lynch has not yet traveled to Baltimore, she sent two officials from the department — Vanita Gupta, head of the federal Justice Department’s Civil Rights Division, and Ronald Davis, director of the Community Oriented Policing Services Office.

The city has spent $6 million in the past four years to settle 100 cases of police brutality and other misconduct.

Additionally, Baltimore State’s Attorney Marilyn Mosby is expected to get a report from the city police department’s investigation on Friday, May 1. She then will decide whether to pursue charges against the six police officers that arrested Mr. Gray. Officials announced last week that all six have been suspended with pay.

“Why wasn’t Fred’s side of town developed?” Rev. Jackson asked. “Why can’t the west side get what downtown gets?”

The curfew Tuesday was mostly obeyed. However, initially, about 200 protesters ignored warnings from police and pleas from pastors and other community activists to disperse. Some threw water bottles or laid down on the ground.

A line of officers behind riot shields later fired pepper balls at the crowd, which then dispersed in a matter of minutes.

On Wednesday, city police and National Guard troops patrolled Baltimore’s streets, giving the city a semblance of calm. Peaceful demonstrations continued. Baltimore’s Major League Baseball team, the Orioles, played the Chicago White Sox at Camden Yards near the Baltimore Inner Harbor tourist area. But the game was played without any spectators at the stadium on the order of the Orioles management after consultation with MLB, state and local officials, a sign of the tenuous security situation.

Baltimore’s Symphony Orchestra staged an impromptu concert downtown as a demonstration of appreciation for the city.

Democratic presidential candidate Hillary Clinton also weighed in on the unrest in Baltimore during a speech Wednesday at Columbia University.

“The tragic death of another young African-American man. The injuries to police officers. The burning of peoples’ homes and small businesses,” she said. “We have to restore order and security. But then we have to take a hard look as to what we need to do to reform our system.”